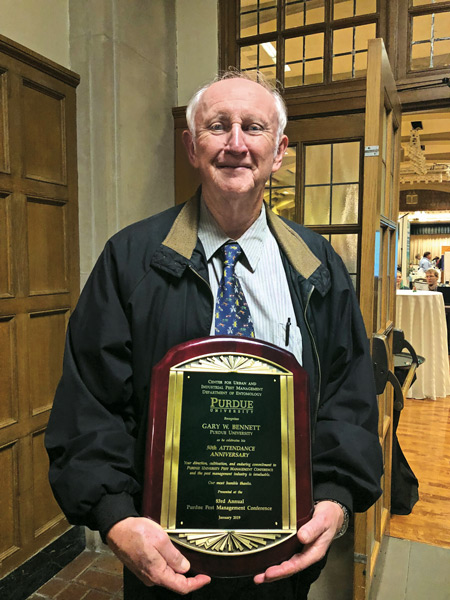 Before he became a Pest Management Professional (PMP) Hall of Famer in 2006, before he became a Board Certified Entomologist (BCE) — heck, before he got his driver’s license — Gary Bennett started in pest control at age 12. It was 1954, and he was spraying outside of structures as a technician’s assistant at his dad’s Lake Charles, La.-based Bennett Pest Control.

But before he graduated from NCSU, Dr. Bennett was hired as an assistant professor at Purdue University, West Lafayette, Ind. As he recalled in his 2006 PMP Hall of Fame profile, Dr. Bennett and his wife, Milta, “arrived in snow up to our knees. Milta had only seen snow two or three times in her life. She was seven months pregnant, and I had to leave there and return to North Carolina a few days after Christmas to complete my dissertation.”

That was December 1969. A month later, he attended his first Purdue Pest Management Conference. Little did he know then that he and Milta would make West Lafayette their home for the next 50 years — and that by 1990, he’d be in charge of the very event he was attending.

Dr. Bennett also is the coordinator of Purdue’s Urban and Industrial Pest Management Center, and the lead author — along with fellow PMP Hall of Famer Dr. Bobby Corrigan (Class of 2008) — of the past several editions of Truman’s Scientific Guide to Pest Management Operations. The “bible of the industry” originally was published in monthly installments in this very magazine, from January 1961 to June 1962. It was part of a Purdue Correspondence Course by yet another PMP Hall of Famer: Dr. Lee Truman (Class of 2002).

Dr. Bennett has been a mainstay of the industry, mentoring students who have become respected entomologists in their own right, including BCEs Dr. Kathy Heinsohn, American Pest Management, and Dr. Stephen Kells, University of Minnesota, to name just two. He’s also been a longtime member (and frequent officer) of industry organizations such as the Indiana Pest Management Association (IPMA) and Pi Chi Omega, which at its semi-annual meeting and dinner at the Purdue Conference in January recognized him for his 50 years of membership. He’s been a member of the IPMA Hall of Fame since 2004. His insightful research has been published in trade and scientific journals alike, and he has long been praised for his way of explaining technical topics in a way that non-entomologists can understand.

Although he has international stature for his work with PMPs, Dr. Bennett is likely most closely associated with the Purdue Conference. It’s been his baby for nearly three decades now, and if his staff has their way, it will continue to be for years to come. At this year’s meeting in January, after his opening ceremony remarks at the conference, Dr. Bennett sheepishly concluded “And now, there’s something that’s supposed to happen that I really don’t know a lot about.”

Dr. Corrigan zipped up to the podium, and began a lighthearted slideshow presentation of Dr. Bennett. Dr. Corrigan was assisted by Gene White, BCE, global director of vector management at Rentokil-Initial. Afterward, the pair called Dr. Bennett back on stage to receive a plaque recognizing his 50 years of attendance. They then beckoned for Holly Fletcher-Timmons, manager of the Purdue Pest Management Conference, to emerge from the other end of the stage with a new office chair for the honoree.

Typically, this kind of recognition comes with a Purdue-branded, Tiffany-style desk lamp, but as Fletcher-Timmons noted onstage: “He already has one!”