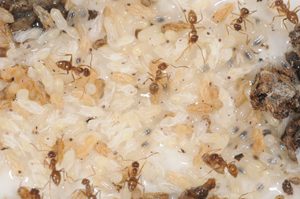 According to a University of Texas (UT) press release, in 2014, the staff at Estero Llano Grande State Park, on the Rio Grande outside Weslaco, Texas, began seeing large colonies of ants they did not recognize around the buildings and in the restrooms. Then staffers began noticing the ants driving birds out of their nests — a particularly bad thing at a park that is part of the Rio Grande Valley’s World Birding Center.

Rabbits in the park no longer fled from humans; the ants had blinded them by secreting an acid into their eyes. Turtles became so covered in ants they would leave their nests to submerge in water. On night hikes through the park, less charismatic but equally important native species such as scorpions and tarantulas rapidly disappeared. Even visitors — including schoolchildren — were being swarmed if they stopped on a trail.

“We sought help,” says park superintendent Javier de León, “and we were lucky enough to find UT and Dr. LeBrun.”

Dr. Ed LeBrun and his fellow biologists at The University of Texas at Austin knew what the ants were: tawny crazy ants (Nylanderia fulva), formerly known as the Raspberry crazy ant.

Whereas fire ants build mounds, crazy ants indiscriminately “cover everything,” says Melissa Jones, habitat conservation coordinator at the World Birding Center in the Rio Grande Valley. “There are so many ants that they are crawling on everything that moves, walks, crawls, breathes. They come in and they just out-compete our native wildlife because the natives don’t know how to deal with this intruder.”

“Tawny crazy ants nest in every sort of pre-existing hole in the ground they can find,” says Dr. LeBrun.

“Crazy ants don’t really have defined nests — they’re just running all over the surface of the ground,” adds Dr. Larry Gilbert, director of UT’s Brackenridge Field Lab. When they invade a wooded area, he says, they go all the way to the tops of trees foraging for food.

In addition to devastating Texas’ ecosystems, crazy ants are threatening homes and shorting out electrical equipment such as sewage pumps.

“They move into houses, which is very problematic for the homeowners,” says Dr. LeBrun. “Residents I’ve spoken to in these environments that are infested with crazy ants say they want their fire ants back. These people are struggling, sweeping up dust pans full of dead ants every day.”

Like fire ants, crazy ants are native to Argentina and Brazil, and were introduced by shipping from South America to the Gulf Coast states. The pests get their name from their erratic movement that contrasts with the orderly “marching” of other ants. Unaided, they spread at a rate of only 200 meters a year, but humans are helping them spread much faster. They transport the pests unintentionally in potted plants, in RVs that go among state parks, and in other ways. Currently, about 26 counties in Texas are infested, from the Rio Grande to the Hill Country and east to the coast.

Crazy ants don’t have the venomous bite that gives fire ants their name, but they do have a weapon that lets them prevail against fire ants and also a wide variety of native species: formic acid. The acid acts as an antidote to fire ant venom and incapacitates a huge variety of native animals by blinding them.

“Fire ants were a multibillion-dollar problem in the U.S., but for us, it was an ecological problem as well,” says Dr. Gilbert. “So we made a lot of progress, and that got a lot of funding, and we developed a laboratory for invasive ants. When crazy ants appeared in Texas, we were ready with the infrastructure and the personnel to address that problem in the same way that we did the fire ants.”

UT scientists want to get ahead of the curve and start controlling these populations before they spread throughout the southeastern United States, says Dr. LeBrun. “We’re pursuing sustainable control strategies that rely on finding natural enemies of crazy ants — that only impact the tawny crazy ant — and then introducing them as a way to sustainably manage crazy ant populations.”

Dr. LeBrun works with partners in South America to search for crazy ants’ natural enemies, such as diseases that affect only crazy ants. UT is also borrowing from its long-running study of fire ants and phorid flies. These flies inject their eggs into ants, and, in a gruesome turn, the larvae devour the ants alive from the inside before emerging from their carcasses.

The clock is ticking. “We think it’s important to get on the problem rapidly,” says Dr. Gilbert, “and we were really ahead of everyone doing that because we had the fire ant lab. In many ways, this has a bigger impact than the fire ant to local citizens.

“We don’t know what it’s going to do if we just let it totally out of the box,” he says of the looming crazy ant problem, “but we’re not wanting to find out.”

Dr. LeBrun says the overall goal is to achieve “sustainable control”: “Sustainable control simply means reducing their densities below the point where they are a problem. So if we succeed, crazy ants will still be around, but nobody will care.”

Four meetings and a trade show