Grab a beer in San Fran with your favorite rat 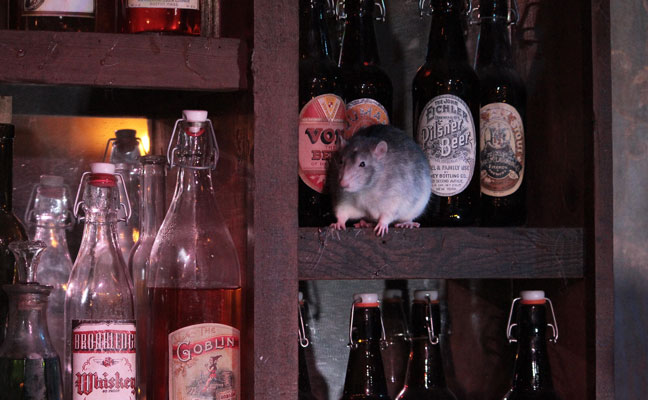 The headline from the San Francisco (Calif.) Chronicle pretty much sums it up: “Rat-infested pop-up bar to open in San Francisco.”

But the Rat Bar will be open June 13-15 as a pop-up at 145 Jefferson St., hosted by the San Francisco Dungeon at Fisherman’s Wharf.

“In 2017, this same group brought a similarly styled rodent spot to the city called the Black Rat Cafe,” the Chronicle reports.

“Journey into the dark place where live rats run free and the booze flows like water,” the official press release purrs. “Here’s how it will work: right off the bat (rat?), arrive and start drinking Rat Bar’s signature cocktail—The Ama-RAT-O Sour. Take one guess what’s in it. Yes! Amaretto, some kind of a citrusy mix and a ‘rat’s tail’ as garnish.”

Part of the experience includes a 60-minute interactive show where “you’ll learn all about the weird, twisted, dark side of the city’s history.” Actors will recreate some of San Francisco’s darkest moments including the gold rush, Chinatown gangs, Miss Piggott’s saloon where you’ll get Shanghaied, the plague and end in an Alcatraz prison cell.

Virgin mocktails will be available for those under 21.