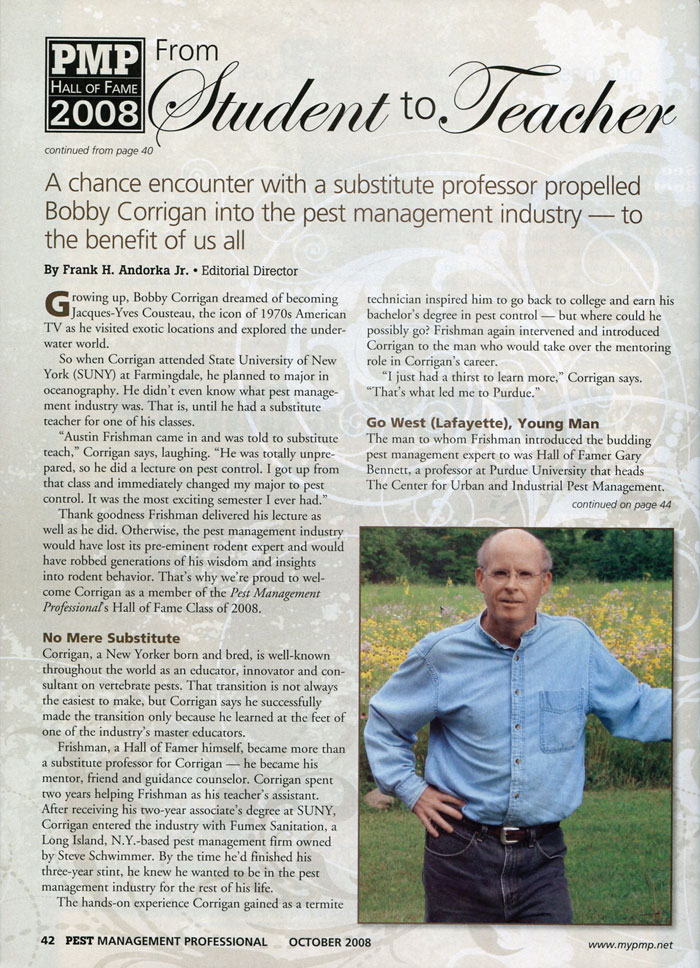 Rodent control methods are rapidly evolving. From non-toxic baits for biomonitoring to the use of dry ice, Dr. Robert “Bobby” Corrigan remains at the forefront of these developments through his work as a consultant and educator.

When we inducted Dr. Corrigan into the Pest Management Professional (PMP) Hall of Fame in 2008, he was 57 years old and had already accomplished so much. Yet, he insisted he had “plenty left to give the industry” and wasn’t “planning on slowing down his 60-hour weeks any time soon.”

Since his induction, Dr. Corrigan continued to consult on major urban pest projects, like taming rodent populations in Philadelphia, Pa., for Pope Francis’ arrival in 2015.

He also helped found the Scientific Coalition of Pest Exclusion (SCOPE 2020), a group of pest management professionals, agency members and academics focusing on pest exclusion in urban areas. The coalition promotes exclusion as an essential — though underdeveloped — method of controlling pest populations in urban integrated pest management (IPM) programs. SCOPE 2020 aims to advance pest exclusion practices through research and education, connecting PMPs, property owners and professional builders so they can better work together to prevent infestations.

Despite the hefty workload Dr. Corrigan shoulders between his consulting business, RMC Consulting, and his role with SCOPE 2020, he still manages to make rodent control fun. In 2018, he appeared in a promotional film for Catseye Pest Control called “Rat City,” which follows Dr. Corrigan’s inspection of a rat-infested restaurant in Boston, Mass.

It’s telling that the footage used in “Rat City” was originally intended for training videos. When PMP interviewed Dr. Corrigan for his PMP Hall of Fame induction, he noted the important roles his teachers played in his development as a rodentologist. Dr. Corrigan would not be the rodent expert he is today without the guidance of fellow PMP Hall of Famers Dr. Austin Frishman (Class of 2002) — who introduced Dr. Corrigan to the pest control industry at State University of New York at Farmingdale — and Dr. Gary Bennett (Class of 2006), who advised Dr. Corrigan at Purdue University. Dr. Bennett, it should be noted, is retiring June 30 after a 51-year career at the West Lafayette, Ind.-based university.

Dr. Corrigan is now a pre-eminent educator himself. He has been the principal instructor for the New York City Department of Health’s Rodent Control Academy since the program was established. Students sign up months in advance for his three-day course in rat management. The highlight of the class is the nighttime rat patrols, where Dr. Corrigan takes students to potential rat hot spots in New York City, inspecting for signs of infestation.

The rodent academy concept takes Dr. Corrigan around the country, too. With his help, other cities such as Seattle, Wash.; Dallas, Texas; and Washington, D.C. have adopted rodent academies of their own.

In 2017, Dr. Corrigan earned the Excellence in IPM award from the New York State Integrated Pest Management Program (NYS IPM) at Cornell University. His commitment to mentorship is apparent in the impact he’s had on fellow entomologists and PMPs.

“Bobby inspired me to pursue pest management as a passion, not just a livelihood,” said Dr. Matt Frye, an urban entomologist with NYS IPM, commenting on Dr. Corrigan’s achievements. “I’m not alone. If you’re in roomful of pest management pros when Bobby speaks, and you see light bulbs blinking on all over the place, you get a feel for the impact he has had — not just in New York, but around the world.”

No doubt, a generation of PMP Hall of Famers to-be can thank Dr. Corrigan for his mentorship. In the meantime, we’re excited to see what the “Rat Czar” will accomplish next.