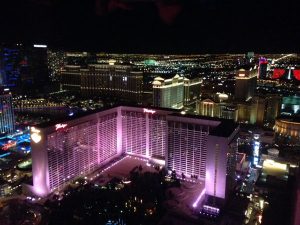 Las Vegas, as seen from a High Roller cabin 550 feet in the air. PHOTO: DIANE SOFRANEC

The increase in pest activity follows the occurrence of two earthquakes — magnitude 6.4 and 7.1 — on July 4 and 5, respectively. The quakes were centered near Ridgecrest, Calif., but were strong enough to be felt in Las Vegas.

The timing and severity of the infestations after the earthquakes seem like more than a coincidence to some local PMPs, who speculate that the tremors drove pests from their usual nesting sites into homes and businesses.

Others point to seasonal patterns instead. PMPs often experience higher call volumes during the transition from spring to summer. A colder, wetter spring — resulting in a longer than average mating season — may be to blame for higher numbers of grasshoppers, cockroaches and ants.

Local news channel KTNV in Las Vegas contacted the Nevada Department of Agriculture to weigh in on the matter. KTNV reports that an entomologist with the organization says it’s possible for seismic activity to disturb pest populations but does not believe the tremors that reached Las Vegas were strong enough.

Seismic activity on the West Coast continues. A 4.9-magnitude aftershock occurred the morning of July 12 near Ridgecrest hours after a 4.6-magnitude earthquake struck 40 miles northeast of Seattle, Wash.

Many parts of the United States are seeing wild weather this weekend. Louisiana is bracing for Tropical Storm Barry — the first tropical storm that will make landfall in the United States this year — severe thunderstorms and heavy rains battered New Jersey yesterday, and Alaska experienced record high temperatures during the past week.