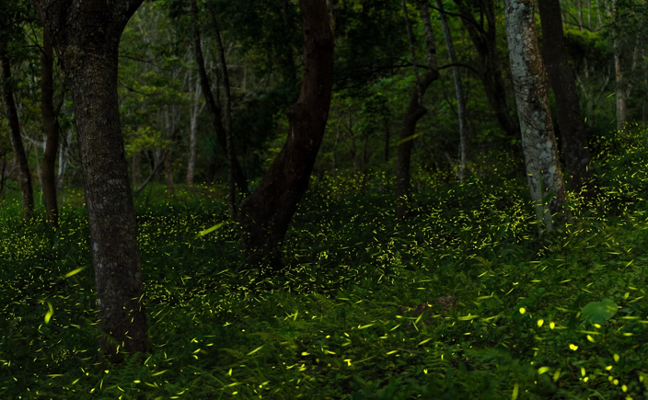 Smokey the Bear, make room for Sparky the Firefly. At least, that’s what some of our young, future entomologists thought when they witnessed a truly spectacular display put on by Mother Nature this June. For a second year in a row, members of the pest management industry got a first-row seat to the Synchronous Firefly Event in the Great Smoky Mountains National Park.

While well-known to the local population of the Elkmont and Gatlinburg, Tenn., area for decades, it wasn’t until the 1950s that the mating ritual of these rover fireflies caught the attention of entomologists and naturalists. Once word spread, individuals began making their way to the park to see the light show for themselves. Over time, the National Park Service (NPS) saw the need to balance people’s desire to view this phenomenon against the need to protect and conserve the fireflies and their habitat. Because of these efforts, the annual Synchronous Firefly Event has continued to grow in popularity since the 1990s.

For two-weeks in late May to early June, the mating season for the Photinus carolinus, America’s only species of firefly capable of a synchronized lighting display, is the star attraction. The National Park Rangers and their entomologists begin predicting the mating window by studying the temperature, weather and rainfall in order to plan the event’s timing and lottery.

When the mating season arrives, the males of these tiny, flying fireflies, sometimes regionally known as lightning bugs, light up or “flash,” their abdomens at females to attract a mate. It’s this lighting pattern that makes the fireflies at the event so famous and so unique.

Instead of the random, flash-at-will pattern common in most all other firefly species, the male Photinus carolinus has been flash-mobbing potential girlfriends for thousands of years. The males time, or synchronize, their flashes together as a mass, all going off together for a few twinkling seconds, then all going dark for a few moments. This pattern repeats all through the dusk and early night hours. Throughout the woods and across the park, from a height ranging from two feet off the ground to 10 feet above the forest floor, these fireflies spread out, twinkling like moving strands of Christmas lights, threaded through the trees, brush and even over rivers and ponds. In near darkness, with no light pollution, you can see them in masses through the distance, weaving and flying to their own music.

The females stay on, or close to, the ground during this display, responding with a quick double flash as a response to the males. Scattered throughout this display, you’ll also get glimpses of the 18 other firefly species located within the park. One of note is a deadly copycat species that mimics the synchronous firefly’s flashes to lure in a mate, only to consume them.

Every year, around late April, the NPS announces the dates for the lottery to view the synchronous firefly event. The park receives close to 30,000 lottery applications for the coveted 1,800 parking passes. Each parking pass is good for one vehicle with up to six firefly enthusiasts. Lottery winners and their scheduled view dates are announced during the second week of May. Costs are minimal: $2.00 per shuttle passenger and a $20 reservation fee. Applying for the lottery is free. When the day of your pass arrives, you pull into the park’s Sugarlands Visitor Center before 7 p.m. and get in line for a shuttle. The park service staff is good about giving you advance notice of what to bring and how to prepare for the night.

We spoke with many steadfast lottery applicants who waited more than five years to be selected. If you’re one of the lucky lottery winners, our best advice is to share the experience with family and friends, meet a few new friends on the way, and, when the show starts, just sit back, relax and take in the magic.

The park also has an option for large groups (up to 24 guests) in their large vehicle pass that you can apply for in the lottery as well. Tammy Johnson, Johnson Pest Control in Sevierville, Tenn., won the large vehicle pass for our group. It was the first time she had won entry into the park, even though she’s been a local all her life. All-American Pest Control of Nashville, Tenn., Griffin Pest Solutions, of Kalamazoo, Mich., and A-1 Termite & Pest Control, of Lenoir, N.C. were there as well.

We wish all of you good luck in getting a seat next year.

Blauvelt is vice president of operations at Griffin Pest Solutions and president of the Michigan Pest Management Association.