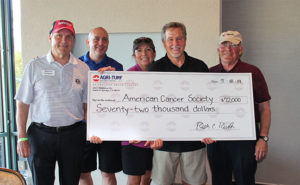 “The tournament is a great example of how the business community can partner with the American Cancer Society to make an impact on a terrible disease,” says Lon Records, CEO of Agri-Turf and regional council member of the American Cancer Society in Orange County. “Agri-Turf is thankful to have the support of very dedicated sponsors and volunteers that help make this event possible.”

All event proceeds benefit the American Cancer Society in its efforts to provide funding for leading cancer research and patient services. During the banquet, the check presentation amounted to $72,000, but post-tournament donations brought the final donation to $75,000.

Since the tournament began in 2015, the event has raised over $274,000 for the American Cancer Society. 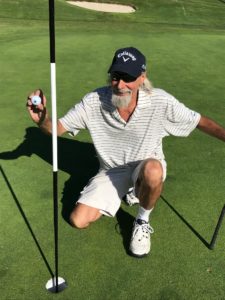 The tournament also celebrated its first hole-in-one this year. Rob Van Orsdol of Premium Termite and Pest Control in Lancaster, Calif., hit a hole-in-one on the last hole, winning a $10,000 cash prize.

Nobody was more surprised than Van Orsdol. “I didn’t know why everybody was yelling,” he commented after the fact. “I didn’t realize I was on the contest hole until I looked up and saw the sign!”