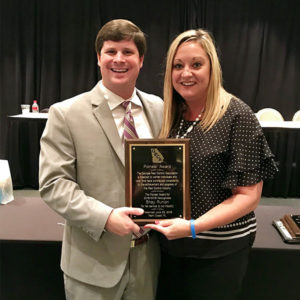 GPCA President Stuart Sinyard and the executive board presented Shay Runion — chief HR officer and senior VP of professional development at Arrow Exterminators and a past president of the GPCA — with the Pioneer Award, which honors individuals who over time have contributed consistently to the achievement and progress of the pest control industry.

“I am honored and humbled to receive this prestigious award from the Georgia Pest Control Association. My involvement with the GPCA has been instrumental in my own personal professional development and growth,” says Runion. “I have developed many lasting friendships with GPCA members, and many have also mentored me throughout the years. I want to be able to give back to others in our industry just like my GPCA friends and mentors have done for me. I have loved serving with the association for over 18 years, and I look forward to many more years to come.” 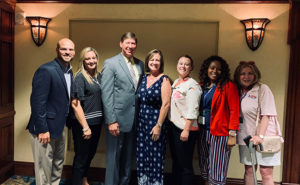 Arrow Exterminators’ Brantley Russell, region VP, was recognized for his service to the GPCA as GPCA secretary and treasurer for the 2018-19 term and was sworn in as GPCA’s VP for 2019-20.

In addition, the GPCA’s Education Committee, co-chaired by Alyson Gilleland — director of Arrow University at Arrow Exterminators — won GPCA Committee of the Year for 2018-19.

“We are so very proud of our incredible team members for all of their industry accomplishments. It is an honor to watch their leadership and professionalism get recognized with such well-deserved accolades,” states Emily Thomas Kendrick, president and CEO for Arrow Exterminators. “Their enormous effect on and contributions to the Georgia Pest Control Association have helped us all raise the bar for professionalism and integrity within the industry as a whole.”