At the 2019 Pest Management Professional (PMP) Growth Summit, PMP’s staff encouraged attendees to share the business and pest control tips that work for them. Check out this column each month for advice and tips overheard at the 2019 PMP Growth Summit.

‘Green As Can Be,’ even on the road 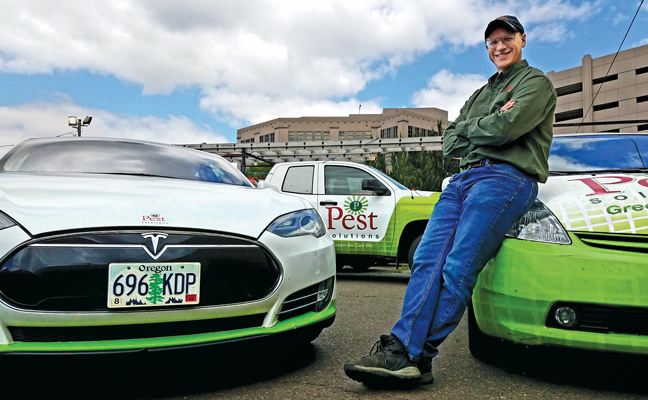 Eric Ufer, president of Pest Solutions and 2019 PMP Growth Summit attendee, became a pest management professional (PMP) in an unusual way: During 17 years on Wall Street, he began buying and renting residential properties on the side, starting in the 1990s. By 2011, he had become so well-versed in pest control as a landlord, dealing with and learning from other PMPs, that he decided to change careers. Fast-forward nearly a decade, and Ufer’s Beaverton, Ore.-based company has grown to 12 employees.

Ufer has low turnover at his company, and he attributes that in part to a strong training program. Employees are empowered to not only understand and perform their tasks to the best of their abilities, but to also learn firsthand what other team members are doing to get the job done right.

“There is no ‘common’ sense,” he quips. “Once I learned that, it really opened my eyes to ladder safety, product usage and all these other things that we sit down at least monthly to go over.”

He uses ridealongs to foster a better working environment. But they are not limited to technicians riding along with other technicians or service managers; the office staff job-shadows technicians and vice versa.

“They can learn the challenges and plusses of others’ jobs,” he says. “And they can be better informed when working with one another and with our clients.”

From the start, Ufer’s company motto has been “Green As Can Be.” He and his team work hard to embody this ideal with a nearly paperless office, an emphasis on non-chemical strategies, and the use of as many low-toxicity pesticides as appropriate. He’s also forever keeping a watchful eye on new products and technologies.

“We are playing with drones — not just airborne, but also crawling [units],” he offers as an example. “If our techs spent less time in crawlspaces, they’d probably be happier!”
From the start, Ufer says, he knew his company’s fleet would include Toyota Prius hybrid electric cars.

“We also have a Tesla now, in our service vehicle [lineup],” he says. “I believe that’s part of being as technology-driven and ‘Green As Can Be’ — fewer emissions and more efficiencies.”

How to handle bad reviews online

On the first day of the 2019 PMP Growth Summit’s social media-themed roundtable, five clear tips emerged for dealing with bad reviews on Yelp and other online sites:

2020 PMP Growth Summit | If you’re a pest management professional who makes the purchasing decisions for your company, we invite you to apply to attend the 2020 PMP Growth Summit at Reunion Resort in Orlando, Fla. Qualified attendees receive complimentary accommodations, meals, beverages and golf. To learn more and apply, visit PMPGrowthSummit.net.