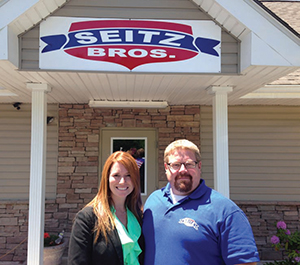 The acquisition was completed in late 2018. Seitz Brothers is now a part of the Terminix Specialty Brands division.

Founded in 1975, Seitz Brothers has more than 80 employees. The pest control company operates three locations in eastern and central Pennsylvania and covers a large territory, reaching into the Poconos, and into Philadelphia, New Jersey and New York.

Seitz Brothers is dedicated to creating healthier, more energy efficient environments for homeowners with crawlspaces and basements, according to their mission statement.

“Brian and Kylie Seitz are awesome people, and I am glad that I got the opportunity to work with them. Getting Brian on the team is a huge win for ServiceMaster,” Giannamore says.

Brian Seitz, president of Seitz Brothers, shared some insight about the selling process and getting the right buyer for the company.

“I never expected to sell our family business,” he says. “I was approached by an acquirer and then got Paul and the Potomac team onboard. He took the business out to formal sell-side process, and we ended up doing a deal with ServiceMaster, rather than the company that originally approached us. Paul told me that if I accepted the offer I had in hand, I would be leaving a lot of money on the table. He turned out to be abundantly correct. Getting Potomac involved was the best investment we ever made.”