A different kind of ‘deer mouse’ 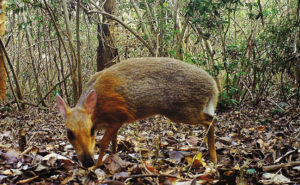 One of several images of the silver-back chevrotain taken by the mounted cameras. IMAGE: Southern Institute of Ecology/Global Wildlife Conservation/Leibniz Institute for Zoo and Wildlife Research/NCNP

The silver-backed chevrotain (Tragulus versicolor) is also known as the Vietnam mouse-deer, which is much more descriptive of its appearance. It’s considered to be the world’s smallest ungulate, or hoofed animal, and since 1990, it was considered to be a “lost” species — until now. Recently, trail cameras set up by Global Wildlife Conservation successfully photographed a chevrotain in the wild. A scientific article on the discovery appears in the Nov. 11 issue of Nature Ecology & Evolution.

Media reports are careful to not say the animal was extinct; rather, it just was not being seen in the wild. From its discovery in 1910 until 2004, it was treated as a subspecies of the greater mouse-deer (T. napu). It is also often mistaken for the lesser mouse-deer (T. kanchil). It’s not even a real mouse; it’s a mammal about the size of a rabbit.

According to a writeup in National Geographic, the group plans to use more cameras in another area of Vietnam to “conduct the first-ever comprehensive survey of the species, to assess its population size and distribution” as part of its “Search for Lost Species” program, which is looking for approximately 1,200 animal and plant species currently lost to science. The chevrotain is the first mammal rediscovered in the program. Earlier this year, the group found evidence of Wallace’s giant bee (Megachile pluto), which had not been seen since 1981.

Using trail cameras to monitor rodent and wildlife populations is becoming more common in the pest control industry, too. In fact, our resident wildlife expert, Stephen Vantassel, BCE, recently blogged about some great tips for using these devices. Several appear in our August 2019 issue, and online here.

Are you using mounted trail cameras at your accounts? Or are you using photos and videos in other ways, such as with a GoPro device? If so, email us at pmpeditor@northcoastmedia.net so we can learn more.