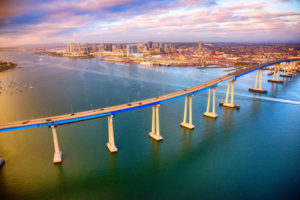 Caltrans contacted Nixalite of America about installing the Nixalite spikes. The organization was seeking a temporary measure to deter suicide jumpers while they planned for a more permanent architectural solution, such as fences, glass panels or nets. After Nixalite sent samples for a year-long feasibility test on the bridge, Caltrans decided to move forward with the installation of the bird spikes.

Caltrans ordered nearly 7 miles of Nixalite spikes and installed them in rows along the 2.1-mile bridge. The 4-inch spikes, usually used to prevent birds from roosting on ledges, sit atop the 3-foot-tall walls that line the bridge.

Since it opened in 1969, more than 400 people have fallen to their deaths on the Coronado Bridge, which connects San Diego and the city of Coronado, Calif., and spans the San Diego Bay.

The spikes cannot physically prevent a suicide jump, but they may serve as a psychological deterrent, evoking fear of injury or at least slowing down people considering suicide enough that they might reconsider or allow time for emergency teams to arrive.

Suidcide-prevention signs and hotline information already are posted on the bridge, but concerned citizens – including the grassroots organization Coronado San Diego Bridge Collaborative for Suicide Prevention – have been pushing for a more effective barrier.

“While it is a major milestone, getting the temporary barriers approved, we must not lose sight of the fact that our job (collaboratively) is not done yet,” says Rhonda Haiston, founder of the group. “This location will always hold an attraction to many with thoughts of suicide. Why? Because the bridge is majestic and alluring, and not everybody will seek the help they need, so restricting access to this lethal method, will, I feel, always be necessary.”