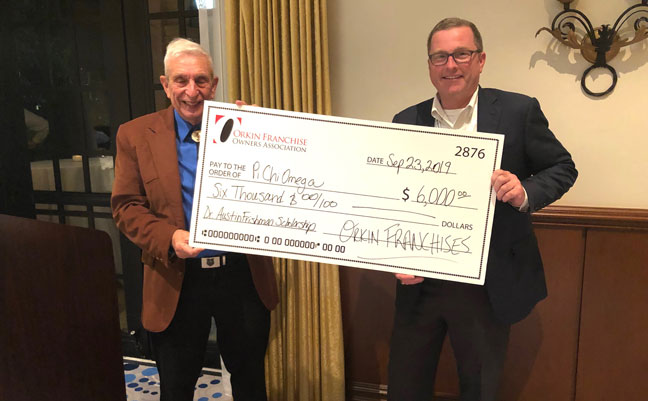 Editor’s Note: Due to the national health emergency and the upheaval many Universities are experiencing in rescheduling classes and closing campuses, Pi Chi Omega extended the deadline to submit applications from March 15 to April 15.

Ehmann was an industry leader, educating the service and sales forces of pest control businesses by designing and implementing a national education program.

The Norm Ehmann Scholarship will be awarded for 10 years, unless additional funds are raised. Plans are already in progress to raise an additional $30,000 to make the scholarship permanent, according to a release from Pi Chi Omega.

The second donation was from the Orkin Franchise Owners Association (OFOA). The $6,000 contribution was made honoring Dr. Austin “Doc” Frishman, PMP Hall of Fame (Class of 2002).

During OFOA’s annual meeting in Boca Raton, a fund raiser was held in honor of Doc to support Pi Chi Omega’s Scholarship Fund.

“Doc has been a part of all of our learning and growth,” said OFOA President Todd Sawyer. “Through his lifelong dedication, he has made an impact on every PMP whether they’ve known him for 30 plus years as I have or have never met him in person. The Pi Chi Omega scholarship fund is a clear path towards generating the next industry legends.”

Pi Chi Omega currently awards an annual $2,000 scholarship in honor of Doc. The additional funds donated by OFOA will help meet the yearly financial commitment to fund $11,000 in scholarships.

Pi Chi Omega has been awarding scholarships to undergraduate and graduate students pursuing degrees in urban and industrial pest management since 1976. To date, more than $200,000 in scholarship support has been provided to 135 students.

All currently enrolled undergraduate or graduate college students studying urban or industrial pest management are encouraged to apply. Applications are due March 15 and can be downloaded here.

Contributions to the Pi Omega Scholarship fund can be made here.