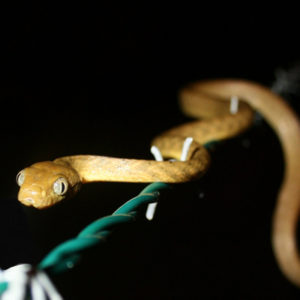 The invasive brown tree snake may reach 10 feet in length as adults; however, most snakes on Guam are 3 to 4 feet long. The snake is rear-fanged and considered mildly venomous. It uses both constriction and venom to help immobilize its prey. PHOTO: USDA/APHIS

I’m a simple woman: When I see an online headline like “Why does Tylenol kill snakes,” I click.

The resulting article on RealClearScience.com goes on to describe how in 2013, the U.S. Department of Agriculture’s Wildlife Service (USDA-WS) laced 2,000 dead mice with 80 mg of acetaminophen, the active ingredient in Tylenol and similar over-the-counter pain relievers. The mice were then dropped over Andersen Air Force Base in the U.S. territory of Guam in parachutes — yes, you read that right — as a way to battle the invasive brown tree snake (Boiga irregularis), which was messing with the local ecosystem. They are believed to have arrived in Guam in the 1950s accidentally, via imported cargo. But by 2005, the snakes were doing an estimated $4 million of damage and lost productivity because of their frequent interference with electrical substations. Did I mention the densities of up to 13,000 per square mile?

But back to the headache-free mice carcasses: The snakes ate the mice, then humanely fell into a fatal sleep.

Unlike, say, introducing Asian lady beetles (Harmonia axyridis) in the 1960s and beyond to control agricultural pests, for example, this actually worked. It didn’t harm any other animals beyond the target, because birds and mammals do not succumb to acetaminophen at such a low dose.

But why? A study published in the March 11, 2019 issue of Scientific Reports dove into finding the answer. As the RealClearScience article explains:

A previous study hypothesized that reptiles lack the enzymes needed to metabolize acetaminophen. Over just a few days, elevated levels of acetaminophen can kill liver cells. However, in only a matter of hours, they can convert an organism’s oxygen-carrying hemoglobin molecules to methemoglobin, which cannot transport oxygen. The body’s cells are thus starved of oxygen, resulting in death.

It seems that the program will continue until the balance in numbers can be restored. In the meantime, other reptiles are making headlines for a different reason in south Florida: Iguanas are falling out of trees because of the cold weather.