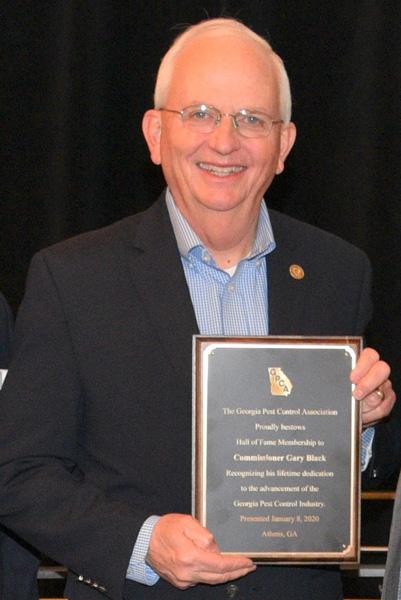 Gary Black, Commissioner of the Georgia Department of Agriculture was inducted during a ceremony at the association’s annual Winter Conference in Athens, Ga., on Jan. 9, 2020.

The GPCA Hall of Fame represents leaders in pest management who have dedicated their career to helping grow the integrity and professionalism of the industry.

Black, now in his third term as commissioner, was first elected in November 2010. Under his leadership, the department’s food safety and animal health regulatory programs have received national acclaim and the Georgia Grown brand’s had a big economic impact, according to his bio on the Georgia Department of Agriculture’s website.

Georgia Trend magazine named Black Georgian of the Year in 2017.

Black has spent all of his life in agriculture. He grew up on a farm in Commerce, Ga., where he and his wife, Lydia, continue to raise commercial beef cattle today. After being an active member of the Commerce FFA (Future Farmers of America), Black was elected state president of the Georgia FFA Association in 1975.

Black earned a degree in agricultural education from the University of Georgia’s College of Agricultural and Environmental Sciences. After interning with United States Senator Herman Talmadge and the Senate Committee on Agriculture, Forestry and Nutrition, Black began his career at the Georgia Farm Bureau.

Previously, he worked at the Georgia Agribusiness Council, where he was elected president in 1989. During his time at the council, he helped establish the AgriTrust of Georgia insurance program and with promotions for agriculture during the Centennial Olympic Games in Atlanta, Ga. According to his bio on the Georgia Department of Agriculture’s website, he also helped develop a strong reputation for agriculture advocacy in the legislative and regulatory arena.