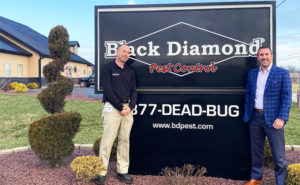 Eric Freedland, who began working as a tactical eradication agent in the company’s pest control division in 2017, is the new branch manager.

“Everyone who works here has the opportunity to turn a job into a career,” said Keith Duncan, Jr., Black Diamond’s CEO. “We’re always looking for potential, and when we see it, we try to make things happen — not just for the good of the company, but for employees with long-term goals as well.”

Freedland says new customers in his area can expect the same outstanding customer service that has helped the company’s headquarters become the largest local pest control company in Louisville and the Southern Indiana markets.

“I’m grateful for the opportunity,” Freedland said. “I’ve learned a lot from the Black Diamond team, and I look forward to working hard and making this new branch a success.”