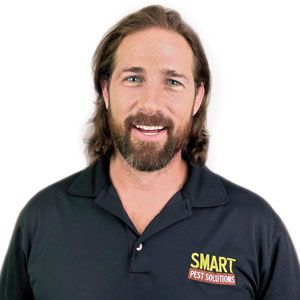 Matt Hamblin is the owner of Smart Pest Solutions, Gilbert, Ariz. We caught up with him to hear some stories about his rodent control experience.

Hamblin: When I was a young technician in the late 1990s, I had a residential account with a ridiculous amount of house mouse activity. I’d set 30 traps, and was catching one on nearly every trap visit after visit. I easily caught more than 100 mice over time. I guess the couple had just let it go too long, and the only way I was able to get it under control was with frequent trips and traps. This of course happened in mid-summer, when it was 116°F outdoors and probably triple that in the attic. I’d come downstairs from my trap check looking like I had just come out of a swimming pool. The couple felt so bad for me, they started tipping me each visit!

Q: Can you recall the single smartest rodent you’ve run into, and how you got the best of it?

Hamblin: This story is so legendary, it’s known around the office as “The Great Rodent Stakeout of 2009” (laughs). At an apartment of a woman with two small children, a roof rat (Rattus rattus) was gnawing on the bottom of cereal boxes stored on top of the fridge, and chewing through loaves of bread. The property manager, Pamela, was spending her own money replacing groceries for this family, because the resident was working full-time and this rat was costing the family more money every day.

For weeks on end, this rat evaded every trap I set. The resident said that she had seen him a few times, always between 1 a.m. and 3 a.m.

I thought about the deer hunters in my family. It takes time, quiet and patience to bag a buck. Then I hit upon an idea. I went back to Pamela and the resident and asked: “Would it be weird if I just came over and did an overnight stakeout?”

The family stayed the night in a nearby hotel. Pamela gave me the keys to three vacant units beside and above the resident’s apartment. I arrived around 10 p.m., armed with a camping cot and a good book.

With no kids or pets around, I could be aggressive with my trap setting. In each of the four units, I put traps everywhere. I put out every brand and type I had. I put out three different types of bait. “He’s got to hit on something,” I thought.

Once all the traps were set, I laid down on the cot and used my cell phone as a flashlight to read my book. I didn’t want to disturb the environment any more than I already had, just with my presence.

Every hour, I’d check the traps in the vacant units. Finally, on my 1 a.m. rotation, I checked the apartment above the resident’s unit and saw blood streaked across the kitchen floor. I followed the trail and sure enough, it had gone around the corner of the cabinet and perished with the trap. It was my 10-point buck!

⦁ Realize the ripple effect. The “stakeout” took place 11 years ago, yet Pamela still tells the story to people at apartment manager mixers, etc. I have no idea how much business she’s brought me over the years by telling that story to her colleagues, but I am willing to bet it’s a lot.

⦁ Underpromise, overdeliver. In that same vein, think about the Thanksgiving dinner effect: Families around the table, talking about a recent pest problem they had. Hank the technician doesn’t sell the job to Mrs. Smith’s cousin, but the fact that Hank not only keeps the pests at bay, but does the little extras like brushing off the spider webs from Mrs. Smith’s porch every visit might cinch the deal.

⦁ Communicate expectations. My brother is a technician, and years ago he went to check on traps he set in an attic, only to be confronted with a horror show: Rats were decapitated, sliced in half! He examined the traps, and realized that the trigger bars had been filed down into rodent guillotines, basically. The customer apologized, but confessed to the filing because “I was afraid they wouldn’t kill the rats fast enough, so I sharpened them so it would be faster and more humane.” As a result, explaining to customers that we already try to make control measures as humane as possible — and to please not interfere with our work — is a big part of our initial visits.