A strategy for catching an elusive rat 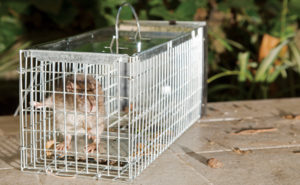 As with most general pest control services, understanding the basics of rat biology, behavior and control means that most jobs will be quick and easy. However, the rat’s intelligence level is above that of an insect: With its ability to learn, it can become trap shy and give even experienced operators a run for their money.

For purposes of this article, I am going to assume three things:

OK, let’s get on with the strategy:

Change your current strategy altogether. Use a snap trap that has no food scent or human scent on it, so you do not raise any red flags. I am not opposed to using a used trap that has rodent smell, as long as you can scrub any food residue off of it, and you have always handled the trap with gloves to avoid human scent. But if needed, get a new trap, fresh out of the package.

2. If you think it’s in the attic, find common travel paths through the insulation.

With blown insulation, this will be obvious — but should not be difficult to find with batted insulation. Do not bait! Instead, remove insulation from the trail, lay down the trap, and gently place insulation or tissue paper over the trap. Make note of the area for later. Remember, you are not trying to attract the rat; on the contrary, you are trying to catch it walking naturally. If you were to use any kind of attractant, it would be insulation with rodent feces from another home to invoke natural, instead of manmade, curiosity. This is called “blind” setting, and is a common technique used by wildlife trappers.

3. If you think it’s in the crawlspace, modify the above.

You may need to dig a depression in the dirt to fit the trap, and then cover it lightly with waxed paper topped off with a light layer of sifted dirt.

Knowing what the rat is doing, where it is going, and how it is behaving will allow you to be more effective. A wide variety of monitoring equipment is available, from sensors to cameras. Many can even text you updates.

Think of a box outside the box

When you get to the point of being able to bait for and trap an otherwise trap-shy rat, continue to think outside the box. I have had great success, for example, with a live trap with 0.5-inch-square mesh we have on hand for squirrel and chipmunk control. For rats, your bait should be placed behind the pan, not on the pan. I prefer baiting with something large, like halved oranges, apple slices, or half an ear of dried corn smeared with a commercially made attractant, to avoid baits being “stolen.”

Rats continue to test my patience, too, from time to time, but I hope this strategy can help you wrap up those difficult jobs just a little more quickly.

STEPHENSON is owner of Gold Country Wildlife Control, Grass Valley, Calif. He may be reached at 530-760-7103 or goldcountrywildlifecontrol@gmail.com.

STEPHENSON is owner of Gold Country Wildlife Control, Grass Valley, Calif. He may be reached at 530-760-7103 or goldcountrywildlifecontrol@gmail.com.