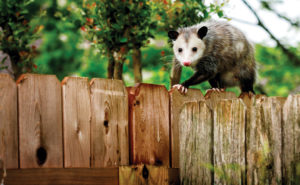 An opossum might eat ticks, but it also could spread ticks on your customer’s property. PHOTO: GALINAST/ISTOCK / GETTY IMAGES PLUS/GETTY IMAGES

More and more, I am running into customers who are questioning whether they should have me remove opossums from their crawlspaces or attics because they are reading on social media that opossums can get rid of Lyme disease-carrying ticks in their yards. Is this true? —DITHERING ON DIDELPHIDS

Opossums (Didelphidae) are one of the most interesting species of wildlife we deal with from a biological standpoint. They have some very unusual and cool attributes. But to me, an opossum in your attic or crawlspace is a “whole different animal” from an opossum in your yard or neighborhood.

The benefits of having an opossum in your vicinity are that they are omnivorous and will eat a lot of things we don’t want around. Insects, ticks, rats, mice and even snakes are on their list of top food sources. But the drawback is, so is our garbage. Do they eat ticks and other insects? Yes, but they also will eat bird eggs.

Opossums do not tend to be aggressive — unless you are threatening their young. They are solitary, nomadic and nocturnal, so you aren’t likely to encounter them on a regular basis. They don’t dig into soil to create nesting spaces, but they will utilize existing spaces like that in which to live.

Opossums have ectoparasites, such as fleas, ticks and mites, that can cause issues. They can carry diseases such as tularemia. They are not generally known for being very susceptible to rabies. But when they “play ’possum,” they often foam at the mouth, which may give the impression they have rabies.

I have dealt with some pretty severe issues over the years with fleas and mites after the departure of a nomadic opossum from crawlspaces. So away from your home, in your neighborhood? I would say that opossums are going to leave you alone, so it’s OK to leave them alone. In the crawlspace or attic, or under the deck? You are better off taking care of the issue and making sure you do not have ectoparasite issues afterward.

Of course, the best remedy for this is to be proactive around your customers’ homes to help them identify the potential entry points and harborage sites for opossums before they take up residence. If an opossum can get in, a lot of other things — including other species of wildlife — can get in, too.

Email your questions about insect identification and pest management technologies to pmpeditor@northcoastmedia.net. Your questions most likely will be printed and answered in one of Pest Management Professional’s upcoming columns.