BedBug Central’s White to appear on ‘Dr. Oz’ May 8 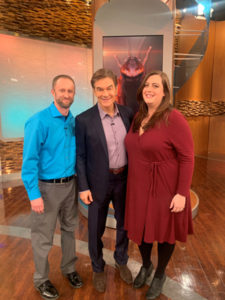 On an episode that is schedule to air on Friday, May 8, on FOX, BedBug Central’s Jeff White will make his third appearance on daytime TV’s “The Dr. Oz Show.” The episode, titled “Breaking News: Bugs, Worms and Creepy Crawlers: The Alarming Rise of Super Bugs Everywhere,” the entomologist appears alongside Florida resident Katie Holley, who has written of her experience of having a cockroach stuck in her ear for nine days.

In the episode, White reassures viewers that the likelihood of having insects infesting parts of your body is extremely low.

“It is under extremely rare circumstances that bugs will actually choose to infest your ears or other body parts,” White said. “Unless you are living in an extremely infested home, it’s very unlikely that this will happen. In the rare instance that it does happen, it can be an extremely unpleasant experience and experts think that the insects may have been attracted to a dark place to hide or chemicals associated with the body that smell like food to an insect.”

BedBug Central confirms to Pest Management Professional magazine that producers reached out to White for his expertise, since they were impressed with his previous appearances. In the news release, he expressed the hope his insights will help end the hype surrounded by the likelihood of bugs infesting people.

“Even though social media makes insects infesting the body appear to be a common occurrence, it just isn’t,” he added. “Research has not shown that it is happening more frequently but with so many social media outlets it is easier to share a video of a bug coming out of a person’s ear and capture a lot of attention.”

- Be proactive with education
This article is tagged with BedBug Central, cockroach, education, TV and posted in News