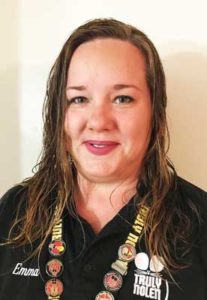 Truly Nolen Pest Control, based in Tucson, Ariz., has promoted Emma Bonilla to manager of the company’s Lake Mary, Fla., service office. Lake Mary is a suburb of Orlando, Fla.

Bonilla joined Truly Nolen in November 2017 and has been a customer service representative, sales partner and trainer. She became a manager-in-training in September 2019.

Some of Bonilla’s new responsibilities will include helping the service office gain more visibility with the local Lake Mary community as well as instilling the company’s core values throughout his team. Bonilla is great at events working with kids as part of the company’s Good Bug/Bad Bug education activities.

“I thoroughly enjoy everything I do,” Bonilla said. “The numerous amounts of programs that are offered in our company to help develop someone and see them grow is fantastic.”

Prior to joining the company, Bonilla spent 18 months as an office manager with Miller Enviro-Care. She has also been a teacher and ran a daycare for five years before her pest control career began. Bonilla attended Bronx Community College with a focus in early childhood education.

“Emma shows a lot of discipline in our company processes and also has a fantastic sense of our culture,” said Alex Bello, district manager, Central Florida. “I look forward to the positive attitude and success that she will bring to Lake Mary.”

Jonathan “Jay” Ramirez was the previous manager of the Lake Mary service office.