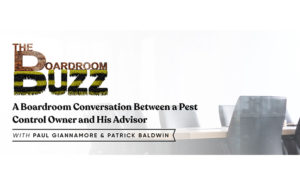 The Potomac Co.’s Pest Control Group recently named Patrick Baldwin to director of business development. In addition, the San Juan, Puerto Rico-based mergers and acquisitions (M&A) advisory firm has debuted a podcast specifically for the pest control industry titled “The Boardroom Buzz.” Each episode features a discussion between Baldwin, who is also a partner in a Waco, Texas-based 855bugs.com, and Potomac Managing Director Paul Giannamore.

Baldwin became associated with Potomac and Giannamore more than a decade ago as an M&A client himself, with a previous pest control firm. Thus, the podcast’s tagline is “A boardroom conversation between a pest control owner and his advisor.”

According to a news release, the duo “focus on issues that are important to shareholders, boards and senior management within the pest control industry. The focus of the podcast is current events impacting valuation, the M&A market, as well as behind-the-scenes discussions on building value in a pest control business.”

Three episodes are currently live, with more in the works:

To listen to the podcast, subscribe using your preferred podcast player. Listeners can email theBuzz@potomaccompany.com to provide feedback and ideas, or even to become a guest on the show.