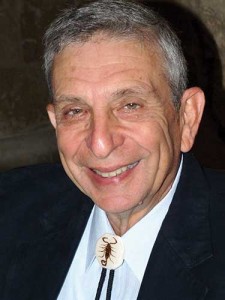 The Pest Management Professional (PMP) team would like to wish retired columnist (and PMP Hall of Famer) Dr. Austin Frishman a happy birthday. Doc turns 80 on May 28.

“Dr. Frishman has been my guru for over 45 years as a mentor, educator and friend, [and has been the same] as well as to countless number of people in pest control,” said NJPMA Executive Director Len Douglen in an eblast announcing the news from Pi Chi Omega. “He has inspired our technicians to adapt to new methods, embrace technology and provide better customer service. He is truly the gentleman of our industry.”

Now living in Florida with his wife, Barbara, Doc Frishman is a New York state native who studied entomology at Cornell University, Ithaca, N.Y.  While originally studying the agricultural side of the field, Dr. Frishman began in the pest management industry between semesters as a summer technician for Al Hochman, who owned Clover Exterminators in Monticello, N.Y. As PMP notes in its 2002 profile:

Hochman took Frishman under his wing, introducing him to the professional side of the industry at a pest control conference in 1960 at Rutgers University. This helped him realize his career options, and Frishman soon earned a master’s degree at Cornell. Due to the persistent interest and encouragement of Dr. John Osmun (and Pi Chi Omega co-founder) at Purdue University, Frishman and his young family moved to West Lafayette, IN, so he could pursue a doctorate.

It was there that Frishman met and became influenced by the strong tradition of research and teaching at Purdue, and there he came to know industry pioneers like J.J. Davis.

Even though he left Purdue in 1967 to head the structural pest control curriculum at the State University of New York in Farmingdale, Frishman became a dedicated participant for the Purdue Conference…

Frishman’s love of teaching blossomed in this time and he became a major influence in the lives of many practicing pest management professionals, teachers and experts working today.

He continues to stay in close touch with many of his former students, saying, “I don’t think more than two days go by today without speaking with one of my former students. It’s like a big, extended family.”