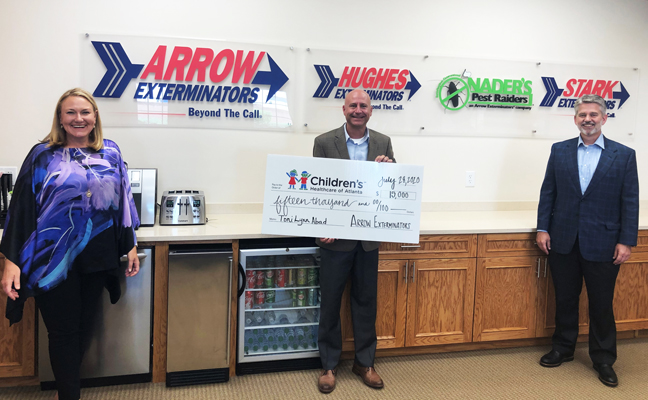 Arrow Exterminators, based in Atlanta, Ga., has donated $15,000 to Children’s Healthcare of Atlanta.

The company has been a supporter of Children’s for more than 20 years by sponsoring and participating in events hosted by this group. The recent donation will be used to further the study of life-saving research for children.

The donation from Arrow is in memory of a team member’s mother, Toni Lynn Abad. All the proceeds will benefit the Friends Funding Goals for Children’s Healthcare of Atlanta which supports the life-saving research and treatments provided by Children’s.

“On behalf of our 2,500-plus Arrow team members and their families, we are delighted to support Children’s Healthcare of Atlanta in any way that we can,” said Emily Thomas Kendrick, CEO of Arrow Exterminators. “This donation is especially meaningful for our team because it is in memory of Toni Lynn Abad, the beloved mother of one of Arrow’s team members, who passed away.”

Abad was born Aug. 17, 1959, in Atlanta. She enjoyed spending time with her family, including her three siblings, four sons and five grandchildren. Toni, or “Granny,” as her grandchildren would call her, was most happy when she was preparing a large meal for her family or when she was helping someone in need, especially children. She was “the epitome of a giver,” her family said, and would help anyone who asked, even if it meant she would go without. Abad expressed her love of Children’s Healthcare of Atlanta and always wished to give back to her community.

For more than 100 years, Children’s has been 100 percent dedicated to supporting kids from all walks of life. Children’s caters to families in need of medical attention whether it’s from pediatric cancer treatments and organ transplants to fracture care and appendectomies.