An interview with an eastern yellowjacket 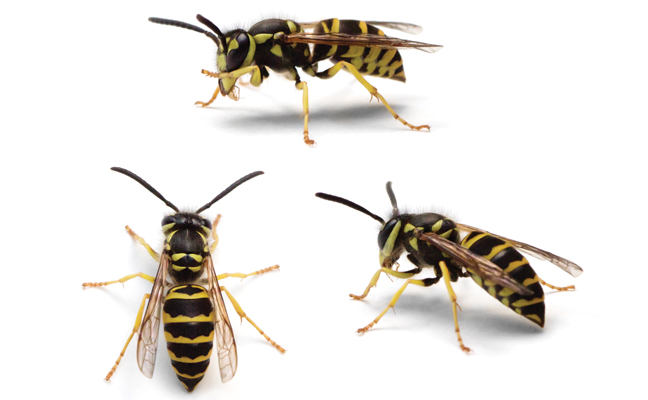 Something to sting about: Get to know the eastern yellowjacket (Vespula maculifrons).

Pest Management Professional magazine (PMP): Ah, the famous yellowjackets, in both the Vespula and Dolichovespula genera. Aggressive. Can sting repeatedly. Responsible for many visits to emergency rooms each year in North America. Stings can even kill people.
Eastern yellowjacket (EY): We prefer to be viewed as a global insect. We are found worldwide, but there are fewer than 20 species of us in North America — including, technically, the bald-faced hornet (D. maculata). Yes, we can be aggressive, but we just want to live peacefully. We only get aggressive when threatened or bothered. Toward the end of the season, though, we do have a reputation for being the most irritable.

PMP: You do realize that people are terrified of you, right?
EY: People bring it on themselves. They leave food uncovered at outdoor parties. They leave sugary drinks unattended and open. It is just an invitation for us to feed. After all, people are literally handing us a buffet on a silver platter. Late in the season, we need sugar for extra energy to finish tasks, and that is why barbecue season is perfect.

PMP: Some people see workers varying in sizes, thinking that one species might have many sizes of workers. Could you address that?
EY: Size of workers vary from species to species, but within a species, workers generally will be about the same size. Variations in size, and even abdominal patterns, indicate that you are being visited by different species.

PMP: Are yellowjackets’ preferred nesting sites inside buildings, or do you prefer outside in the wild?
EY: We are opportunistic. In general, most species prefer to nest underground where we build paper nests, but we are happy to occupy attics or other voids.

PMP: Let’s say we wanted to visit a yellowjacket to bring a nice sugary drink. Where could we find one?
EY: That sounds great! Just look for bare spots in a yard, and let the entrance guards know you’re bringing us a refreshing energy builder.

PMP: Entrance guards?
EY: We protect our nesting areas, so we post entrance guards to make sure workers returning at night are part of the nest and not an invader. They sound the alarm if the colony is threatened.

PMP: It is generally thought that all yellowjacket workers die off late in the season, and new workers emerge the next spring. Is that right?
EY: Many species of yellowjackets are depleted in the fall. But beware! Some species in warmer areas overwinter at full strength. Don’t disturb a nest thinking that only the queen is there; you might get a surprise. In most cases, though, only the queen survives and overwinters. Generally, workers (sterile females) and males all die off and do not overwinter.

PMP: What is your greatest pest management fear? Dusts? Liquids? Aerosols?
EY: It really doesn’t matter. Any one of those controls petrifies us and can be effective. But remember, if you try to hit our colony, we’ll defend it to the death. And yes, we sting repeatedly.

PMP: Thanks for your time.
EY: You’re welcome. Now, about that sugary drink…?