Zooming ahead: The road leading to a Truly Nolen virtual ribbon cutting 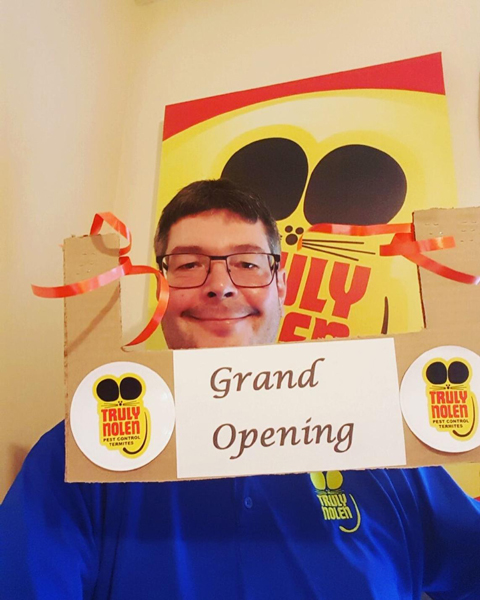 As Truly Nolen’s newest franchise recently debuted in Winston-Salem, N.C., the road leading to its grand opening was unlike any our company has ever done before.

For nearly every franchise grand opening our company has done over the last 20 years, our 27-foot Mouse Limo was a large part of the festivities as well as on-site ribbon cuttings with local Chamber of Commerces.

When I first met franchisee Jim Bess in October 2019, he was a prospective franchisee with seven years of pest control industry experience looking to open a franchise in Winston-Salem. When meeting with him, we discussed traditional and social media, and I was very impressed with the questions he asked. I felt like he understood the importance of messaging and how to market to an audience.

Jim had his soft opening the first week of February 2020 and launched his franchise’s stand-alone Truly Nolen Winston-Salem Facebook page. COVID-19 was just beginning to become a news item, and there was no hint of what was yet to come. By the second week in February, Jim had selected April 29 for his in-person grand opening, and we booked the Mouse Limo to be there alongside the Lewisville-Clemmons Chamber of Commerce (L-CCCC).

By mid-March, it became apparent the world was changing and many people began working from home. Events began to cancel, and there was no clear sign of when they would be able to restart. Despite starting to build his customer base, it was quickly apparent that April 29 was likely not going to work for an in-person event. We had a conversation with Jim, and to his credit, he also recognized an in-person event would not be possible. Therefore, he postponed to a tentative date of August 29. 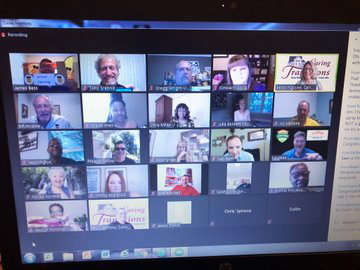 As spring turned into summer, Jim continued his marketing and networking efforts and continued to be visible despite not having a traditional grand opening. Around the middle of July, it became less likely that August 29 would be any better for something in-person due to the current climate essentially remaining unchanged.

One thing we learned since the pandemic began was the power of Zoom. Our Truly Nolen marketing department, like many departments at companies across the country, began having meetings this way and quickly found they were just as effective as if we were meeting in person.

With that knowledge, we approached him when it was time to cancel the August 29 date with a suggestion: How did he feel about being the first franchisee in Truly Nolen history to have a virtual grand opening and ribbon cutting with Zoom? Jim really liked the idea.

“Although I had been looking forward to the fun that normally goes into a grand opening, the health and safety of our team and our customers will always be top priority,” Jim said. “Because pest control is essential to public health, after having so many meetings by Zoom over the last few months, I figured this would be the safest way to officially announce our arrival in Forsyth County rather than wait for an in-person date.” 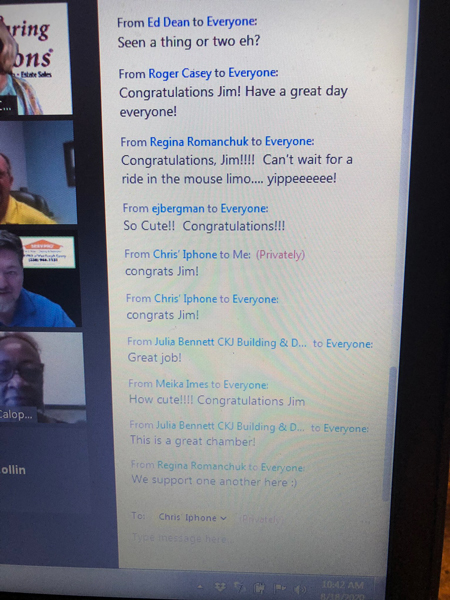 In order for the idea to work to its maximum potential, we made sure the L-CCCC would be willing to be part of the festivities. They loved the idea as well and said Tuesday, August 18 at 10 a.m. would work for them. We spent about three weeks marketing the event with press releases, media alerts, Chamber of Commerce eblasts and Facebook events. With all of these efforts, we had told Jim we hoped 20 people would attend the Zoom call. We had never staged an event like this, so none of us really had any data to suggest how many to expect.

On August 18, we were pleasantly surprised when more than 30 people appeared on the Zoom call announcing Jim’s grand opening in Winston-Salem!

Ditra Miller, the executive director of the L-CCCC, served as a moderator for a conversation that included Jim, members of the Truly Nolen Franchise team, Chamber Members and other guests. Miller interviewed Jim and asked him several questions about his business, while inviting attendees to ask any pest-related questions. Three Chamber members provided unsolicited testimonials about the work Jim has already done on their behalf. The 45-minute call ended with Jim holding a small ribbon over his head and he cut it to everyone’s delight.

Although it was not the grand opening he had envisioned, Jim was pleased with how things turned out. The biggest takeaway for him and our company was the Zoom environment kept everyone in one place and the conversation flowing, whereas at a normal grand opening, people would likely separate and stage several conversations at once.

As we go forward, we believe future franchisees will also make use of Zoom for everything from grand openings to media lunch-and-learns. As a company, with in-person events still not expected to return until 2021, we believe there may be multiple ways to use Zoom with our corporate service offices to host virtual Good Bug/Bad Bug classes and much more.

In the meantime, we look forward to the day our Mouse Limo finally travels to Winston-Salem to make the rounds!

Srebnik is manager of public relations and communications for Truly Nolen Pest Control. He can be reached at 954-247-3212 or toby.srebnik@trulymail.net.