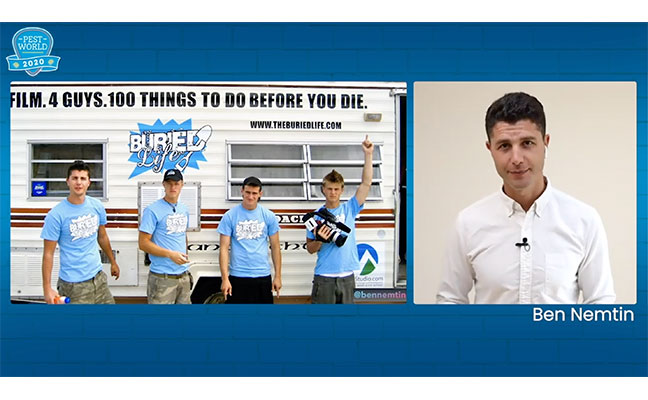 Today, Ben Nemtin is a 36-year-old speaker and fitness consultant. But when he was 18, his anxiety and depression kept him from leaving the house for months. The former high school rugby star from Victoria, Alberta, British Columbia, lied to his parents about going for a walk, hiding in the garage instead. He quit the rugby team, lost his college scholarship and dropped out.

But then he got a job. He started meeting people his own age who were inspiring, doing amazing things. And he decided to make an effort to surround himself only with other people who inspire.

That led to him getting together with three friends who started a project called The Buried Life. It’s the name of a poem written in 1852 by Matthew Arnold, who uses the term for the dreams we have when young that get “buried” by the realities of work and responsibilities. It soon became the name of a reality TV show the four young men starred in from 2010-11 on MTV.

In a nutshell, Nemtin and his buddies were publicly crossing very big goals off their bucket lists, while helping others along the way — from bull-riding to playing basketball with then-President Barack Obama. As the third-day general session keynote speaker at the National Pest Management Association‘s virtual PestWorld 2020 event — sponsored by Syngenta — Nemtin wasn’t there as the reality TV star, nor as the best-selling co-author of What Do You Want to Do Before You Die. Rather, he was urging pest management professionals (PMPs) to take pride in the way they are helping their communities every day, simply by protecting public health for families, stores, schools, restaurants and more.

Nemtin also noted that “one in five people struggle in mental health. It’s safe to say we care about more than five people in our lives.” He urged attendees to fight the stigma of anxiety and depression, which he noted has gone up an estimated 400 percent since the COVID-19 pandemic began. He offered myriad ways to help yourself, if you find you have feelings of hopelessness or anxiety, as well as how to recognize it in others and how to help them get the help they need. Three organizations Nemtin recommended include:

1. BeThere.org is a resource on ways you can help a friend or family member struggling with their mental well-being.

2. ListenersOnCall.com connects you with someone who has experienced what you’re going through, such as a loss of a spouse, and can have an empathetic conversation. As Nemtin notes, “It bridges the gap of therapy and friend.”

3. CrisisTextLine.com is an avenue for people in need of some counseling who don’t like to talk in person or by phone. Simply texting 741741 gives the user access to free, 24/7 advice via a text conversation from a trained professional.

“At the end of the day, we’re going to have ups and downs. That’s OK. What’s not OK is not talking about it,” Nemtin noted.

He also explained the ripple effect, where something as simple as a smile or other act of kindness can go a long way in making a difference in someone else’s life. Take care of yourself mentally and physically so you can take care of others, and of your business, he said. In the end, he said, “Picture your future self on your deathbed: Would I be content with the focus I spent on my personal life? What would I be content with? Reconnecting with someone? Spending more time with family?

“I guarantee,” he concluded,  “You will not regret asking the question.”

In today’s world, customers’ expectations are higher than ever