Are insects dressing up for Halloween? 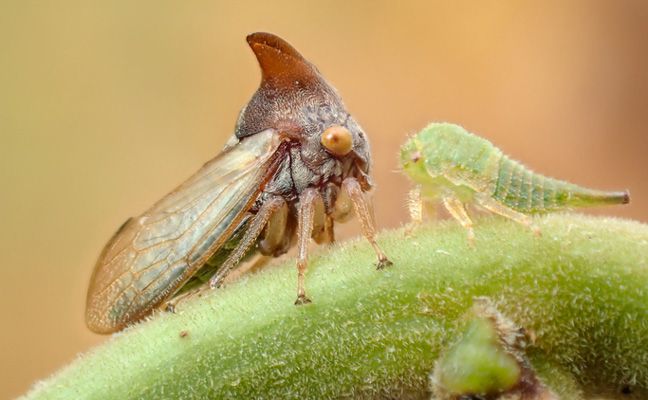 The U.S. Department of Agriculture’s Agricultural Research Service (USDA-ARS) doesn’t come right out and say that some insects celebrate All Hallows Eve on Oct. 31, but well, it did put out a news release that alludes to it:

Treehoppers (Cyphonia spp.) have the most extravagant, bizarre costumes in the insect world. This is mainly because the pronotum (the covering of the first part of the thorax) is usually expanded up and over the body in ways that challenge one’s imagination—and helps it to hide from predators.

ARS Entomologist Dr. Stu McKamey has studied this group of insects for 36 years, and is considered the world authority on treehoppers. He believes the scary-looking insect derived its name from living and hopping between plants and trees, sometimes masquerading as a predator and using other insects to ensure its longevity.

“There are thousands of insects that imitate other insects as a means of survival, but none are quite like the harmless treehopper,” said Dr. McKamey. “There are more than 3,000 known species in the treehopper family, but two treehopper groups, comprising of 71 species, have evolved to look like a stinging, biting predator.”

Treehoppers are all sapsuckers, and are commonly found on the soft growing tips and new shoots on plants, or the undersides of leaves. There’s still so much we don’t know about treehoppers, but one of the most interesting facts about them is that some are “tended” by ants, bees and wasps. This means that when ants use their antennae to check out the treehoppers as a potential meal, the treehoppers produce a more pleasing alternative — their sugary poop, called honeydew, which they excrete in droplets from their own bodies. This is usually considered a mutualism food in exchange for protection and, because of this behavior, if you see a steady ant trail on a plant know that it may lead to treehoppers. In contrast, some treehoppers and other species are not associated with ants and eject their honeydew far from the body, presumably to decrease mold growth near their feeding sites, or to minimize chemical cues to their predators.

The United States contains almost 300 species, many of which are specialized on oak trees. The complexities of these relationships and how they have affected the evolution of treehoppers has not yet been unraveled, yet the research will continue.

Many insects would probably appreciate a candy bar, too. What do you think: Are there other insects, arachnids, etc., that remind you of trick-or-treaters? I can certainly think of a few — as an arachnophobe, despite being in this industry nearly 24 years — that scare the heck out of me!

8 ways spiders can be brought into homes