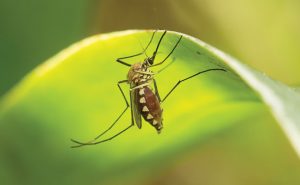 In the Aug. 12 edition of the online journal PLOS ONE, one article’s headline is rather nondescript: “Behavioral responses to transfluthrin by Aedes aegypti, Anopheles minimus, Anopheles harrisoni, and Anopheles dirus (Diptera: Culicidae).” Yet, the repellency implications from this and other studies of the active ingredient transfluthrin are huge.

Zika virus is a mosquito-borne disease worldwide, one that we’ve reported on frequently since it first made headlines with U.S. cases in 2016. Other diseases that mosquitoes can transmit include yellow fever, dengue and chikungunya.

While we typically don’t cover non-professional products for our readers, the spate of recent news coverage on transfluthrin led us to make an exception.

Per a news release by SC Johnson, Mosquito Shield, a spatial repellent product the Racine, Wis.-based manufacturer designed, “could reduce dengue and Zika infections by an estimated 34 percent.” (Note that the product is a separate entity from the Mosquito Shield service franchise.)

The SC Johnson data was collected from a Peru-based study, and represents the second clinical trial of a five-year global program “to investigate the impact of spatial repellents in reducing mosquito-borne disease.” The trial was led by the University of Notre Dame in cooperation with the University of California, Davis and U.S. Naval Medical Research Unit Six.

“The spatial repellent product was designed to be easy to use with minimal handling, which may help to increase compliance,” the release notes. “It can be hung in semi-enclosed and enclosed spaces to continuously repel mosquitoes. Transfluthrin, the active ingredient in Mosquito Shield, passively emanates using natural airflow to protect people from mosquitoes in a specific area.”

While the product is essentially being looked at for use in tropical countries, it is encouraging to know that an active ingredient already registered by the U.S. Environmental Protection Agency is showing such promise against mosquito-borne disease.