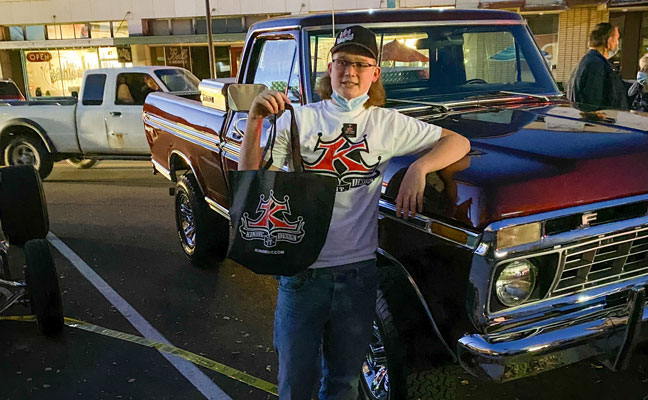 Mason Stark was the man of the hour at the Fox Pest Control/Make-A-Wish event. PHOTO: FOX PEST CONTROL

Logan, Utah-based Fox Pest Control and the Make-A-Wish Foundation of Utah recently threw Mason Stark, a Hyrum, Utah teenager, a “reveal event” in which he learned he was selected by the foundation to grant his wish.

“Twenty members of the Cache Valley Cruise-In Club picked up Mason and his family at his house and escorted them to the Utah Theater on Center Street in Logan, where he was greeted by extended family, Mountain Crest (High School) cheerleaders, classmates and members of Fox Pest Control,” a news release explained.

At the theater, attendees watched “Ford v Ferrari” and afterward feasted on burritos and dessert.

Stark was in an ATV accident that resulted in injuries to his gallbladder, kidney, spleen, heart, liver and ribs. “After surviving a liver transplant, open-heart surgery and rehabilitation therapy, Mason was referred to the Make A Wish foundation, and Fox Pest Control jumped in to sponsor and grant his wish to go on a shopping spree,” the news release explained.

“I had the best night ever,” the 10th-grader said in the news release. “The generosity of the Cache Valley Cruise-In Club to come out and bring their cars and to have my whole class from Mountain Crest to support me was crazy. On top of all of it, the people at Fox arranging it and making it happen is honestly like a wish inside of itself. Definitely a night I’ll always remember.”

Make-A-Wish Foundation Community Manager Melanie Rossiter described working with the Fox Pest Control team as “an absolute joy. Fox embodies what it means to be a partner that truly puts the wish kid first. Every detail of the evening was clearly based all around Mason’s interests and favorite things. We are so grateful to grant wishes with such a generous, thoughtful, community-oriented business.”