Tracing the roots of a phorid fly invasion

Author’s Note: This month, instead of answering a reader’s question, I am sharing how we helped troubleshoot a homeowner’s very tough phorid fly account this summer. I enlisted the help of the entire Rollins technical team with this one: Glen Ramsey, Ben Hottel and especially Frank Meek, BCE, who investigated in person. 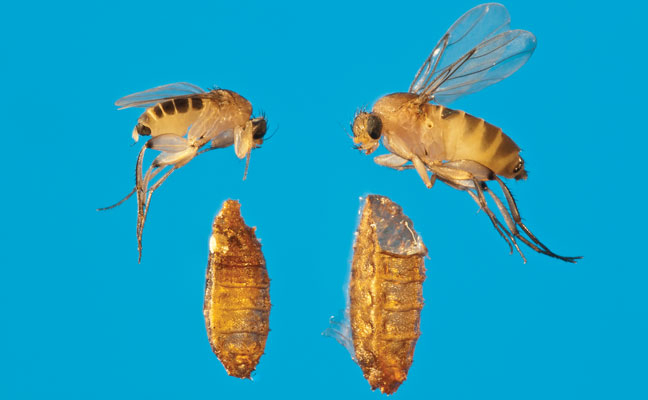 The life cycle of a phorid fly. PHOTO: COURTESY OF, AND COPYRIGHTED BY, GENE WHITE, PMIMAGES@EARTHLINK.NET

For purposes of this column, let’s call the homeowner Jim. He and his wife have lived in a house in Northwest Georgia for more than seven years, and began having a phorid fly issue about three years ago. Jim reports “thousands” of phorid flies are caught in warmer weather, but at least it calms down in winter. In summer, however, they have to use lids on their cups, for example, just to drink their morning coffee. Jim sent us multiple photos to prove this was a serious situation.

The home is crawlspace construction, with a city sewer line. According to Jim, two other houses to the east of his home have issues with phorid flies; the house to the west does not.

Jim went through the litany of what he had done before reaching out to us:

WHAT WE DID TO TROUBLESHOOT

To troubleshoot this phorid fly issue, we first looked on Google Earth to see what was surrounding Jim’s property. By our estimation, this is a “normal” subdivision. All the homes looked fairly new — less than 20 years old and probably much younger. Jim says his house was built in late 2007 and finished in early 2008.

We followed up with Jim about whether there could be an old septic tank, or perhaps the area was built atop an old cemetery, etc. He said he was not aware of any such factors that could play a role. We teasingly asked whether he suspected any neighbors of burying people in the backyard, and while he laughed at our joke, he did admit he suspected one house’s sanitation practices were not up to par and could be a possible source.

WHAT WE DID NEXT

The Rollins Technical Services team discussed the situation and decided we weren’t going to get any further without a physical inspection. We were under travel restrictions in June, but fortunately, Jim’s home was just a day’s drive from our Atlanta, Ga., headquarters. Frank volunteered to check it out.

Frank made it clear to Jim that this was a courtesy visit, and that we had no expectation of signing him to an account. Rather, we offered to develop a solution, if we could, and then let him figure out whether he wanted to do it himself or hire a pest control company (any company). Frank’s inspection netted the following:

Jim said following Frank’s recommendations resulted in a dramatic decrease in live fly sightings, although the population was still active throughout the summer. Then one hot day in August, the neighbor opened her garage door several times over a period of a few hours— resulting in literally thousands of flies in and around Jim’s house.

Jim called the County Code Enforcement Office to file a complaint, and his other neighbors did the same.

A few days later, a Code Enforcement inspector drove out, but was denied entry into the neighbor’s home for inspection. He told the neighbor she had seven days to clean up the trash or face penalties. The neighbor denied having more than two bags of trash in the garage.

Yet the following morning, at 3:40 a.m., Jim observed the neighbor hauling several trash bags out to a 15-foot rented box truck.

We followed up in early September, and Jim reported the problem essentially was resolved.