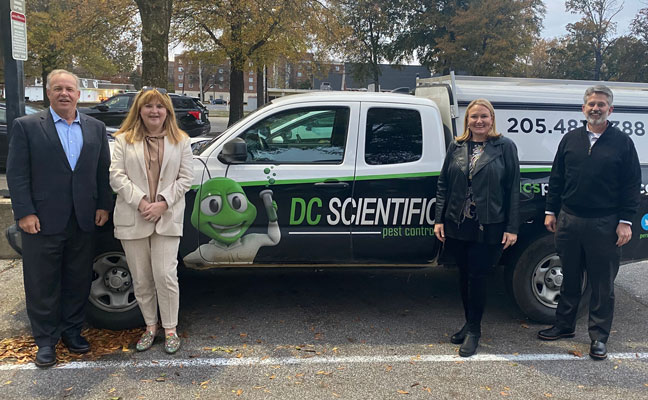 Atlanta, Ga.-based Arrow Exterminators has acquired DC Scientific Pest Control, with offices located in Tuscaloosa, Birmingham and Winfield, Ala. Terms were not disclosed.

“We are very pleased to welcome the customers and team members of DC Scientific Pest Control to the Arrow family,” Arrow CEO Emily Thomas Kendrick said in a news release. “Since 1964, DC Scientific Pest Control has been serving the great citizens of Alabama with an extremely high level of service, and their talented team of employees and their expanded line of service offerings makes them a perfect strategic fit for Arrow. This acquisition will expand our footprint in central Alabama with three new offices, bringing our total to 13 service centers operating in central and lower Alabama. As with our other offices in central Alabama, these three new service centers will operate as Stark Exterminators, an Arrow Exterminators brand.”

DC Scientific’s owner, Ann Majcher, said in the news release that when considering a merger, she knew she “wanted to find a company that would provide a great home for every one of my people, and also needed one which provides exemplary customer service. I found that in Arrow Exterminators, and we are proud to join the Arrow family and continue the legacy that my dad started over 55 years ago. I also looked for a company that would provide our employees with many growth opportunities, and I know we have found that in Arrow.”

Family-owned and -operated since 1964, Atlanta, Ga.-based Arrow Exterminators is the sixth largest pest and termite control company in the United States, ranked by revenue. Arrow boasts a modern fleet of more than 2,100 vehicles, 134 service centers, 2,500 team members with revenues exceeding $275 million and in 2020 was named the #1 Top Workplace in Atlanta by the Atlanta Journal-Constitution. With QualityPro Certification by the National Pest Management Association, the company offers innovative and environmentally responsible services to protect homes and businesses of customers in Alabama, Arizona, Florida, Georgia, Kentucky, Louisiana, Mississippi, North Carolina, South Carolina, Tennessee, Texas and Virginia.

- Rentokil acquires EPS
This article is tagged with Alabama, Arrow Exterminators, merger, Mergers and Acquisitions and posted in News