An interview with a red flour beetle 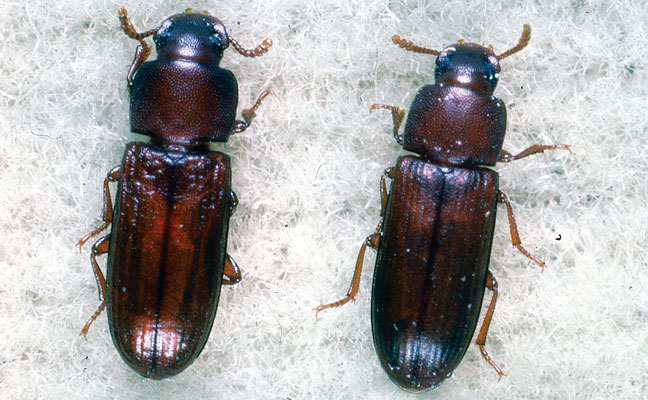 You can lose your mind, when cousins are two of a kind: Get to know the red flour beetle (Tribolium castaneum)

PMP: You are a feared stored product pest. You don’t eat undamaged grain, but you will pounce on damaged grain. Is that right?
RFB: That is correct. We also love flour, which comes from cracked grain, and flour products like pasta — especially in storage bin areas, where there is not much human activity.

PMP: Good to know. You have distinctive antennae compared to your cousin, the confused flour beetle (T. confusum). Can you describe the differences?
RFB: Oh, we’re a crazy pair — one pair of matching bookends, different as night and day. (Thinks for a second.) Well, maybe that’s a bit of an overstatement.

PMP: I guess it’s important to have a hand lens when doing an inspection, eh?
RFB: If you want to get it right, it is.

[Suddenly, the lights go out. After a minute, they come back on.]

PMP: What I mean is that you aren’t a red flour beetle! Your antennae have segments that increase gradually. The red flour beetle has three large segments forming a club. I am sure of this. Just a few seconds ago, you had different antennae. Something strange is going on.
“RFB”: I’m a red flour beetle! Are you suggesting we switched? What kind of Tenebrionidae do you think I am?

PMP: Clearly, one that wants to confuse us. Since you have gradual clubs on the antennae, you are definitely confused.
“RFB”: I told you before you are confused, just like all the others who can’t tell us apart.

PMP: OK, let’s settle this. Let me see you fly. Better yet, let me open this pheromone trap and see what you think. I am raising it above my head. Go ahead, red flour beetle, fly up there. You know you want to.
“RFB” (nervously): Uh… we might have some birds around here that could be predators, so let me look for a way to climb up. Safety first and all, you know! (Hesitates.) Aw, nuts. You caught me. We were just having a little fun.

PMP: Well, I’ll admit you had me wondering about my own identification skills for a minute. What’s the best way to control either confused or red flour beetles?
CFB: Don’t wait until there is a population explosion. Inspect thoroughly, and look under caked flour or meal by scraping any caked flour on floors. Use pheromones to monitor. Be creative with control, and always remember sanitation. Never forget that red flour beetles can fly if needed to get to that food source.

PMP: You certainly gave us a wealth of information. Thank you.
CFB: Anytime. Now, if you don’t mind, I think I’ll start on over to my next food source. (Starts humming “The Patty Duke Show” theme song as it crawls away.)