An interview with an Asian tiger mosquito 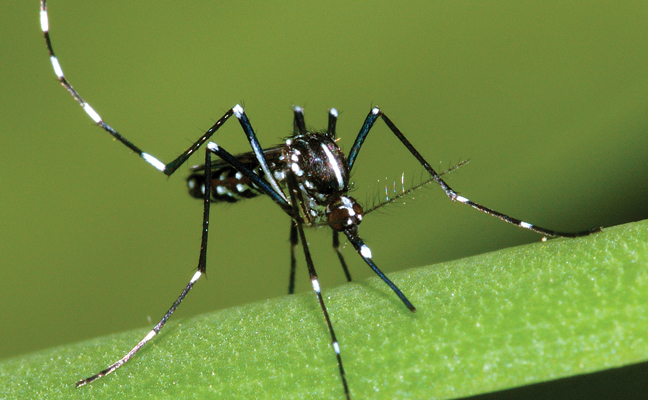 This “tiger” has stripes, but beware: other mosquito species do, too. PHOTO: SUSAN ELLIS, BUGWOOD.ORG

Get to know the Asian tiger mosquito (Aedes albopictus).

Pest Management Professional magazine (PMP): Few insects have received worldwide recognition as disease vectors as have mosquitoes. Today, we are going to talk to an Asian tiger mosquito to learn about her biology and habits. Welcome, Aedes albopictus.
Asian tiger mosquito: Thank you for having me as this month’s Conversation Piece pest! You can call me Al.

PMP: Thanks, Al. First, you are a relatively recent invasive species to North America, correct?
Al: That’s right. We have only been in the United States for about 35 years, but we have quickly established ourselves as a formidable species with which to be reckoned. We also made our way into Canada about a decade ago. It was expected that northern climates would be too harsh for us, but we are survivors. We also were discovered in Mexico just over 20 years ago.

PMP: So, Al, where did you come from originally?
Al: Southeast Asia. In the United States, we are found north to south, but we’re heavily concentrated in the southeast.

PMP: I see that you have nice white bands on your legs. Is that unique to your species?
Al: Thank you for noticing! But other species have similar bands, so please do not make assumptions about species without further checking.

PMP: Good advice. What makes your species so successful, though?
Al: Well, there’s simply not enough time to talk about how great we are, but I will highlight a few reasons. First, we filled the gap as the prevalence of Aedes aegypti declined. We like to take the credit for helping push the yellow fever mosquito off to the side. Also, some mosquitoes are early-morning and late-evening feeders, but we are daytime feeders.

PMP: Interesting, Al. Now tell us a bit about your reproductive habits.
Al: Like other species, females do need a bloodmeal to lay eggs. But our eggs can be laid in dried areas that will ultimately flood. For example, single eggs are not laid directly onto water, but can be on dried surfaces such as tires, since we know they eventually will be hit with rain. These eggs can remain dry, but viable, for about a year. When the water rises, we have a new generation!

PMP: Thank you for your time.
Al: Oh, I’m not done! I have some quiz questions for you. First question: Male and female Asian tiger mosquitoes are blood feeders. True or false?

PMP: True. That is why treating vegetation is so important, but we need to make sure to properly identify the pest mosquito species. Some species are not near shrubs, so when we deal with vegetation it is critical to ensure that bees and other non-target species are not harmed.
Al: Correct! Well, I hope you learned a few things. It sure is getting hot — it’s time for me to go find some shade.