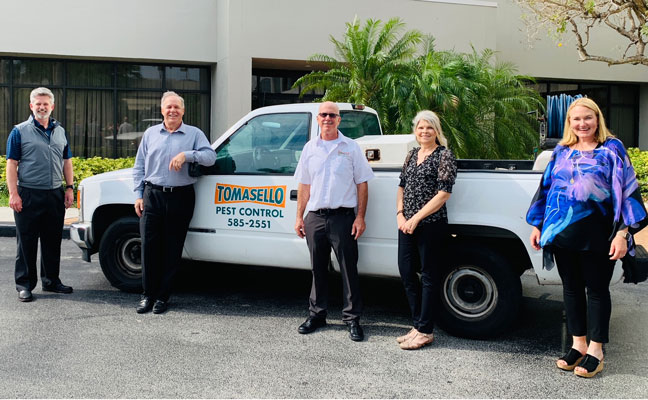 The company was founded in 1928 by Rudy and Blanche Tomasello, and later owned by their daughter Regina Tomasello Doll. Current President Chuck Doll took over as president of Tomasello in 1997. Tomasello has been a full-service company since the early days, offering general pest, lawn and ornamental, termite and fumigation services.

“Tomasello’s history mirrors that of Arrow Exterminators, with both being family companies,” Chuck Doll said in a news release. “When it came time to find a company to acquire our family business, it was an easy decision to select Arrow. The sale of a business is always difficult for company owners. You want the acquiring company to take care of your employees like family. In the era of investment bankers and quick deals, finding a purchaser who has your employee’s best interest in mind is very difficult. Tomasello vetted 32 potential buyers, and no other company gave us the confidence that they would treat our employees as their own.”

About Arrow Exterminators
Family-owned and -operated since 1964, Atlanta-based Arrow Exterminators boasts a modern fleet of more than 2,300 vehicles, 138 service centers and 2,600 team members, with revenues exceeding $285 million. In 2020, it was named the No. 1 Top Workplace in Atlanta by the Atlanta Journal-Constitution. With QualityPro Certification by the National Pest Management Association, the company offers environmentally responsible services to protect homes and businesses of customers in Alabama, Arizona, Florida, Georgia, Kentucky, Louisiana, Mississippi, North Carolina, South Carolina, Tennessee, Texas and Virginia.