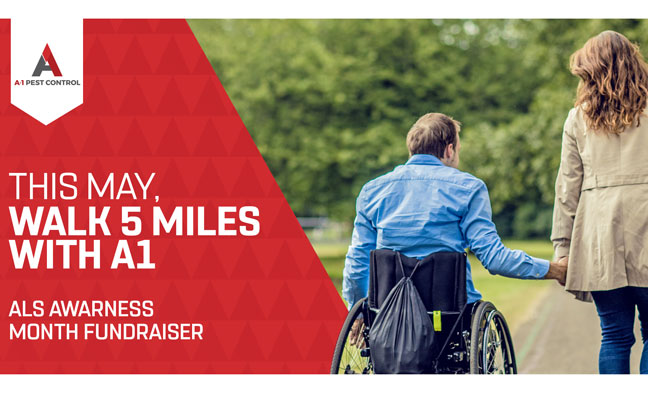 Throughout the month of May, Lenoir, N.C.-based A-1 Pest Control is raising awareness and funds for Amyotrophic Lateral Sclerosis (ALS), often referred to as Lou Gehrig’s disease. This is A-1’s first event to support ALS, and the team hopes to make it an annual occasion.

Bruce Roberts, president of A-1 Pest Control, noted in a news release that his family holds this cause close to their hearts because his mother, Peggy, was diagnosed with ALS in her 60s. Peggy Roberts first noticed something was wrong at age 57, when she fell a few times without cause. Over the years, her symptoms would come and go, and she continued working in administration for A-1 Pest Control, which her husband, Jack, had founded in 1966. According to the news release, when Peggy would leave work for the day, Jack would need to leave with her to take care of her at home. Other family members also provided care assistance to help share the responsibility.

“ALS is a terrible disease that entraps folks, physically, all the while leaving them mentally sharp and aware,” Bruce noted in the news release. “My mother had a great outlook on life, so we did everything we could as a family early in her diagnosis. Like most things in life, one doesn’t realize how many people are affected by ALS until it hits home. With this fundraising effort, we hope to highlight awareness. All proceeds will go directly to the ALS Association North Carolina Chapter to help fund research for a cure.”

Because of the pandemic, this year’s walk will be virtual, with hopes that next year everyone can raise awareness in person. Supporters are asked to join the A-1 Walks 5 for ALS Facebook event page, or check out the team page on the ALS Foundation’s website, and walk 5 miles throughout the month of May, to honor the 5,000 people diagnosed with ALS each year. Walkers are encouraged to wear red, take a selfie or a group picture, and post it on social media using the hashtag #A1Walks5forALS. At the conclusion of the campaign, A-1 also plans to make a monetary commitment to the local chapter.