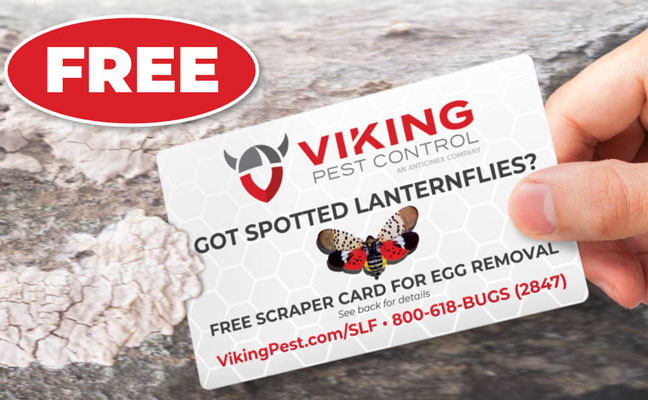 Covering markets in New Jersey, Pennsylvania, Maryland and Delaware, Viking Pest Control, an Anticimex company, has announced its intent to increase its staff by 20 percent in 2021, with all positions being filled from local communities. According to a news release, the positions include service managers, technicians and customer service representatives.

“Our customers have invested in us, and now we want to invest in the community, hiring staff from all of the four states that we service,” President Paul Bergmann said in a news release.

In other Viking news, the Basking Ridge, N.J.-based firm has debuted a free spotted lanternfly (Lycorma delicatula) egg removal tool for customers. The pest is also known in some regions by the acronym SLF.

The Viking news release goes on to explain:

Spotted lanternflies feed on most plant species, meaning that they pose a considerable threat to farms and businesses such as vineyards or timber. They are plant parasites that particularly like to feed on grapes, hops, hardwood trees and fruit trees. While feeding, they expel honeydew, a sweet, sticky substance that attracts large numbers of ants and stinging insects. The substance covers all surfaces below it and encourages sooty mold growth. Eggs are laid in rows from September onward and protected with excretion; each egg mass may contain between 30 and 50 young and it is the eggs that offer the greatest threat to the spread of this pest.

An egg mass is about one inch long and three-quarters of an inch wide and will resemble a splotch of mud or cement. Residents are advised to use their free scraper to remove the egg mass and then deposit the eggs into a plastic bag using gloves and hand sanitizer. It is advised to remove all eggs before they begin hatching in May.