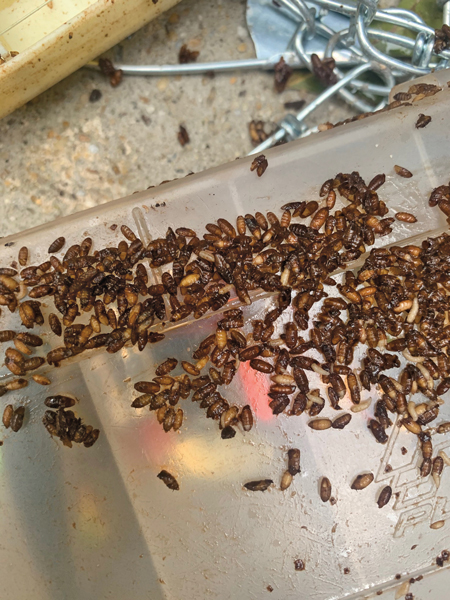 Here’s what happens when you leave catfish bait in a tackle box for several months. PHOTO: JUDY BLACK, BCE

Judy, I have a customer with a 1970s-era basement construction home with house flies (Musca domestica). The homeowners keep the property very clean. I can’t find any breeding site on the inside, so could they just be coming in from the outside? I’m confident the flies are identified correctly.
—Maybe Unusual Speculation Could Assist

MUSCA, I’m going to give this a really solid “perhaps.”

The following is a commercial example, but hopefully it will get you thinking of what might correlate in your customer’s house: I was in a bakehouse that had more house flies than seemed “normal.” I insisted they must be coming from the outside because nothing smelled bad. Instead, the entire account smelled like wonderfully baking bread.

But then they casually mentioned that they had been having issues with the proofer oven. I climbed up a ladder, and as soon as my head got above the 8-foot oven, the smell just about knocked me over. The vent pipe had dislodged somewhat, so the yeast and such was depositing on top of the proofer, creating what I’d call a cesspool in which the flies could breed. We couldn’t smell it because of the strong exhaust fans in that room.

Just to get you thinking about unusual sources, I’ve got another example from my own house, although it’s not about house flies.

I saw a very occasional phorid fly in the kitchen — maybe four over a two-week period. I didn’t give it much thought, beyond I should probably check the trash cans we keep outside the garage to see whether they needed to be cleaned.

One Saturday, my husband called me out to the garage. He was getting his fishing tackle ready for the season and opened the tackle box to find a horrendous odor, and hundreds of phorid flies. He had forgotten and left some catfish bait in there. It was pretty gross visually and olfactorily. My immediate reaction was to say “cool” and grab my camera!

So, again my answer to your question is “maybe.” They could be coming from a hidden source inside, but it is also very possible they are getting in from the exterior, too. I’ve been in some houses near farm/ranchland that had significant house fly entry issues. In those circumstances, you can try treating resting surfaces on the exterior. I’d recommend an encapsulated product for that. The main thing is making sure your customers have well-maintained window and door screens, and that they understand what’s going to happen if they leave windows and doors open without the screens. There might be other openings that need to be sealed, like attic vents.

If the problem is really bad, you might try bag traps outside. I don’t think I’d get into fly baits in a residential account, but I guess it would depend on how bad it is. Start with a comprehensive interior inspection, and then look to the outside. If you find the breeding site on the inside, it’s going to be a simple matter of getting it cleaned up. Follow your nose!

Email your questions about insect identification and pest management technologies to pmpeditor@northcoastmedia.net. Your questions most likely will be printed and answered in one of Pest Management Professional’s upcoming columns.