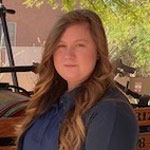 In her new role, Gannon is responsible for coordinating the training department’s continuing education classes, including materials and travel details, as well as overseeing the company’s pin program, which honors longevity and special achievements.

She remains based at the company’s headquarters, and also will manage the Arizona pest management division’s registrations and licensing.

“I am most excited to be taking on more responsibility, along with helping our employees with anything related to training,” Gannon said in news release. “My favorite thing about Truly Nolen is that our work environment is unique and collaborative, and I am excited that there is so much opportunity and room to grow.”

Most recently, Gannon worked as an administrative assistant for Truly Nolen’s western administration center. She joined the company in 2018 as a phone agent in the customer care center. Prior to joining Truly Nolen, she worked in retail for Sportsman’s Warehouse.

“Emily was terrific in her two previous roles with our company, and they both make her well-suited for her new position,” Scott Svenheim, Truly Nolen’s national training manager, said in the news release. “We wish her much success in her new role.”