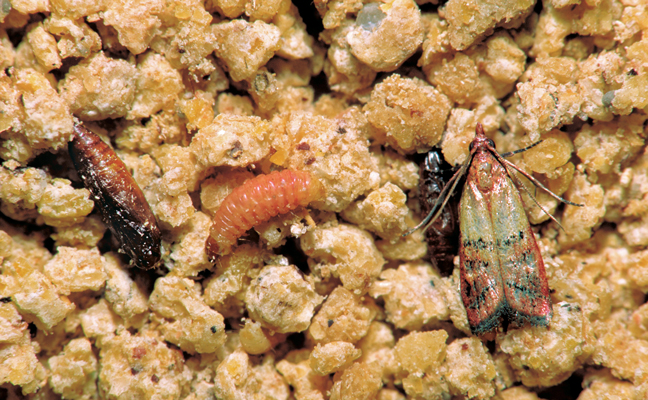 A mix of IMM larval, pupal and adult stages can be easily found together at an account. PHOTO: COURTESY OF, AND COPYRIGHTED BY, GENE WHITE, PMIMAGES@EARTHLINK.NET

In a study published in March by researchers from Houston, Texas-based Rice University and the University of California, Berkeley, among others, Indianmeal moths (Plodia interpunctella, or IMM) exhibited certain behavior patterns depending upon living conditions. In short, if IMM were forced to interact more frequently with family members, they were more generous in their food-sharing behaviors. The less often they were around family, however, the more selfish they became — even to the point of cannibalism.

The study, published online in Ecology Letters, was intended to prove an evolutionary principle that could be applied to nearly any species, including humans.

IMM were chosen because it is easy to ensure their behavior is influenced by local interactions. While the larval stage is mostly vegetarian, larvae will eat their broodmates if food is otherwise unavailable.

As the online resource Phys.org explains, 15 adult IMM females “were placed in several enclosures to lay eggs. The moths lay eggs in food, and larval caterpillars eat and live inside the food until they pupate. Food was plentiful in all enclosures, but it varied in stickiness.” The study was intended to validate a similar one conducted in 2010.

“Because they’re laying eggs in clusters, they’re more likely to stay in these little family groups in the stickier foods that limit how fast they can move,” explained one of the researchers, Dr. Volker Rudolf. “It forced more local interactions, which, in our system, meant more interactions with siblings. That’s really what we think was driving this change in cannibalism.”

While the team seems to be intent on exploring the importance of familial ties in nature, there could be implications for pest management professionals: Perhaps breaking up IMM “family gatherings” at an account can turn IMM against one another? Or is the flip side of that more important: Keeping them together means gaining more efficient population control? Either way, the research on IMM behavior continues.