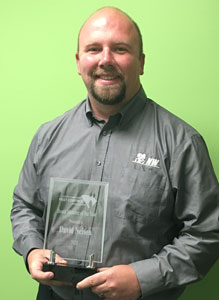 Northwest Exterminating Service Center Manager David Nelson, a second-term Board member for the South Carolina Pest Control Association (SCPCA), was recognized with the 2021 Board Member of the Year award. The SCPCA is created from local pest control professionals committed to pest control and the protection of public health, food, and property. Nelson not only serves on the Board of Directors, but also the Membership and Pest Pro Summit committees.

“David was selected as Board Member of the Year for 2021 due to his unabashed commitment to the association, and for his willingness to not only serve but go above and beyond,” SCPCA President Rich Borden said in a news release. “David is an asset to the SCPCA and embodies the professionalism that we strive to maintain and promote. I look forward to working with him more over the next year.”

Nelson, who is based in Laurens, S.C., has been in the industry for more than 15 years. He initially joined the Northwest Family after the team he was leading prior, Piedmont Pest Control, joined Northwest Exterminating in 2017. “I love being able to support local South Carolina businesses and our pest industry through SCPCA,”  he said in the news release. “I’ve enjoyed the opportunity to meet people across the Southeast that I wouldn’t have otherwise. It’s been a great experience serving on the board, and I am humbled to be recognized for this type of award.”

Scott Eubanks, Northwest’s VP of Industry Relations, is also an SCPCA Board Member and met Nelson during Piedmont’s acquisition. “David was a rockstar from the very beginning,” Eubanks said in the news release. “To acquire a great company, the people have to be extraordinary. The Piedmont team, especially David, is a testament to that. He’s very deserving to be recognized and celebrated with this award!”

Based in Atlanta, Ga., Northwest Exterminating was founded in 1951 and is now in its third generation of Phillips’ family leadership. Joining the Rollins Inc. family of brands in 2017, Northwest has grown across the Southeast to include more than 35 service centers.