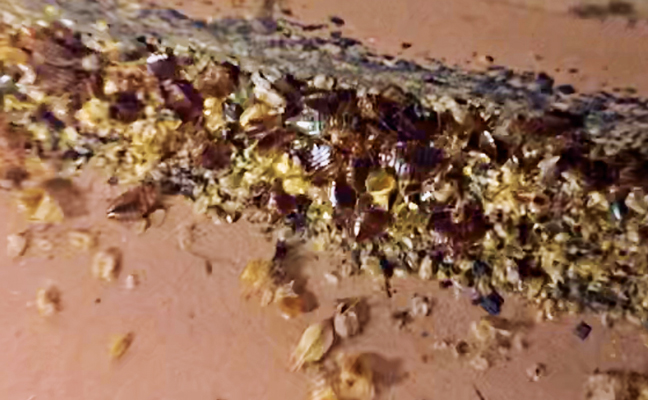 At the home of an elderly woman being taken care of by her son, bed bug molting evidence on her metal bed frame was extensive. PHOTO: SCHOPEN PEST SOLUTIONS

While it’s true bed bugs don’t care about the gender, age, color or creed of the humans they terrorize, they can be particularly problematic for the elderly and people who are bedridden. It’s depressing to realize a client literally has been sleeping with bed bugs and getting bitten on a nightly basis because he or she can’t get away from the little bloodsuckers.

We do a lot of work for a non-profit, senior citizen advocate organization. While we don’t perform the work for free, we do give a significant discount for every job we perform for the group.

This organization provides assistance for people who wouldn’t otherwise be able to afford painters, electricians, handymen or pest management professionals (PMPs). Unfortunately, by the time an advocate or healthcare worker notices bed bugs and reaches out to us, the poor resident(s) have been living with the pests for weeks, or even months.

One horrific case we ventured into occurred at the home of an elderly woman in her late 70s, who was trying to take care of her bedridden daughter. The daughter was being eaten alive by the bed bugs. When we arrived at the home, our techs noticed the mother was acting irrationally. We did our job and reported back to the organization, which confirmed to us the mother was beginning to show early signs of dementia. But until we got the bed bugs under control, the various government agencies involved would not move a full-time caregiver into the home.

After three difficult and trying visits, we were able to get the bed bugs under control. This was done despite the mother getting in our way and refusing to help us move the daughter into another room so we could treat her living area.

Another case for the senior citizen advocate organization involved a man who was taking care of his elderly mother. He tried to solve the bed bug issue on his own, and didn’t believe the problem was that bad. What we saw in that home broke my heart.

The mother’s bedroom was so full of bed bugs that they were crawling on the walls, floors and the metal bed frame. The cast skins were so thick on the bed frame that we had to use a drywall spatula to scrape up the debris while we vacuumed. The molting was 0.5- to 1-inch thick in some areas. When we flipped over her couch, there was a sea of bed bugs attached to the dust catcher.

Lessons learned: If there was a silver lining to this particular account — beyond the fact that we were able to give this woman and her son some peace of mind and respite from the blood-suckers — it’s that I was at the account with a new technician. Talk about trial by fire: After inspecting and treating for bed bugs at this home, his subsequent bed bug jobs have been like falling off a log!