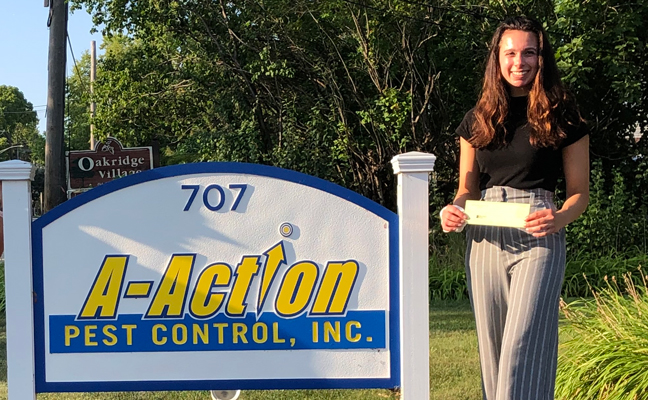 The scholarship is for students pursuing a career in business administration, marketing or another business-related field.

Maile graduated from Catholic Central High School in Burlington, Wis. She plans to pursue a bachelor’s degree in business management and communications from Marquette University in Milwaukee, Wis. She says she hopes to receive a law degree and become a corporate lawyer.

The $1,000 scholarship is awarded annually in memory of Jacqueline Duty, the late wife of company founder Douglas Duty.

The scholarship is intended to “encourage entrepreneurship and small business ownership, since these are core principles on which A-Action Pest Control was founded and are important to the overall community… The A-Action Pest Control team is honored to support Maile in the pursuit of her education and wishes her the best in her studies at Marquette University,” according to a news release.

Per its online About Us page, “A-Action Pest Control was built on the foundation of the love and support of family. In 1988, Douglas Duty started the business, with his wife, Jacqueline, cheering him on from the sidelines. When their daughter Cheri took over as owner 19 years later, her mother continued to be an unwavering source of support, carrying business cards with her and ‘talking up’ the family business whenever she had the chance.