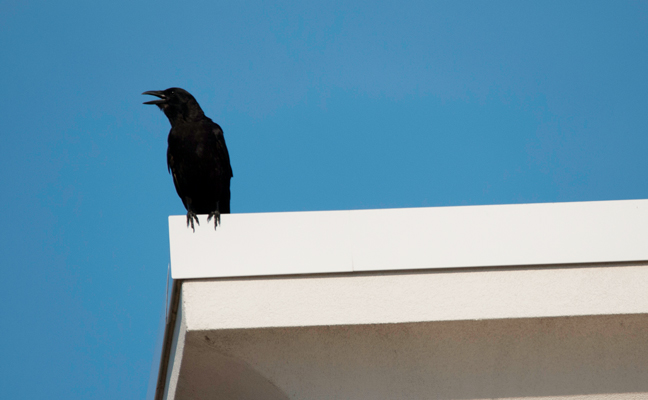 Also known as the common or eastern crow, Corvus brachyrhynchos is intelligent, opportunistic and plentiful.

At 17 to 21 inches, the American crow is a relatively large bird. It typically produces one brood each spring, although two broods per year occurs in some southern areas. Clutches contain four to six eggs, which incubate for about 18 days. The young are fledged at about one month of age, and learn their local territory and how to forage by remaining with and mimicking the parents all summer.

The wily birds can survive more than six years in the wild, and more than 20 years in captivity.

In the fall, crows may join together to form large urban flocks. Winter flocks roost together at night and disperse over large areas to feed during the day. Their feeding range typically is within six to 12 miles from their roost. This is around the time you’ll likely get calls from annoyed homeowners and businesses.

Control success varies. If crows aren’t entrenched in a space, they can react quickly and evacuate because of a minor control effort, such as a visual repellent. Once they know an area will provide them with food, loafing and roosting resources on a dependable basis, however — and if they become used to the people, city noises and disturbances in the environment — crows may lose their wariness and become difficult to disperse. It may take multiple attempts, employing different techniques.

Why pest prevention programs are essential for handling food