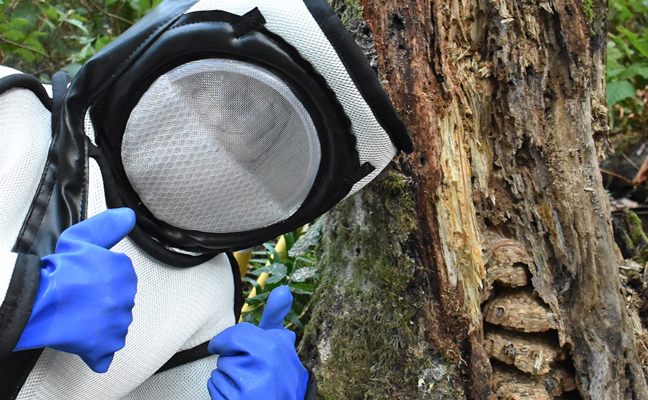 The Washington State Department of Agriculture eradicated the first Asian giant hornet (Vespa mandarinia) nest of the year on Aug. 25 in Olympia, Wash.

The nest was located in the base of a dead alder tree in rural Whatcom County.

Washington State Department of Agriculture staff began the eradication by vacuuming 113 worker hornets from the nest. Once removed, the team began removing the bark and decayed wood near the base of an alder tree at the entrance of the nest. Removing the wood revealed that the hornets had excavated the interior of the tree to make room for the nest, which consisted of nine layers of comb.

The portion of the tree with the nest was cut and transported to Washington State University Extension in Bellingham for further analysis. In addition to the work hornets vacuumed from the tree, the department staff also caught 67 additional hornets in the area with nets during the eradication. The nest itself had nearly 1,500 hornets in various stages of development

“While we are glad to have found and eradicated this nest so early in the season, this detection proves how important public reporting continues to be,” Sven Spichiger, Washington State Department of Agriculture managing entomologist, said. “We expect there are more nests out there and, like this one, we hope to find them before they can produce new queens. Your report may be the one that leads us to a nest.”

Anne LeBrun, national policy manager for Pollinator Pest Programs with the U.S. Department of Agriculture’s Animal Plant Health Inspection Service, noted that the successful cooperation between state and federal agencies and members of the public is paying off in Washington.

“We are pleased to play a role this collaborative success by sharing technical expertise, providing financial support, and collaborating on survey and research efforts,” LeBrun said. “Public involvement remains an essential part of eradicating this hornet.” 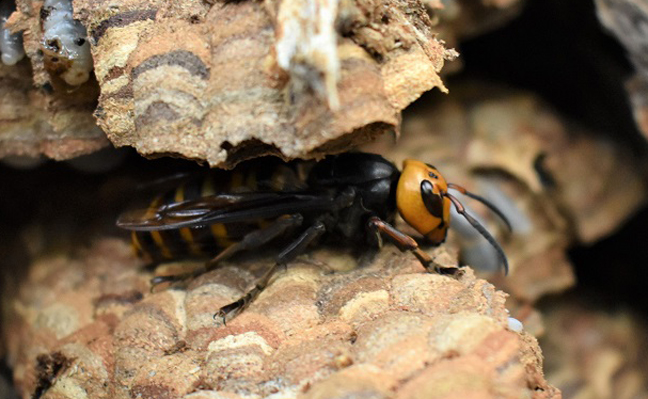 Asian giant hornets, also referred to as “murder hornets,” are the world’s largest hornet and are not native to North America. They prey on honey bees and other insects and can conduct mass attacks on honey bee hives, destroying the hive in a matter of hours. The hornets were first detected in the United States in 2019 when a hornet was reported in Whatcom County.

Since that time, Washington State Department of Agriculture has been working with local, state and federal partners to find and eradicate the hornets and prevent them from establishing in the United States.

Washington State Department of Agriculture will continue to trap for Asian giant hornets through the end of November. People who like to set their own traps can find instructions on the department’s website. Those who suspect they have seen an Asian giant hornet should take a photo if possible and visit the department’s website to report the sighting.