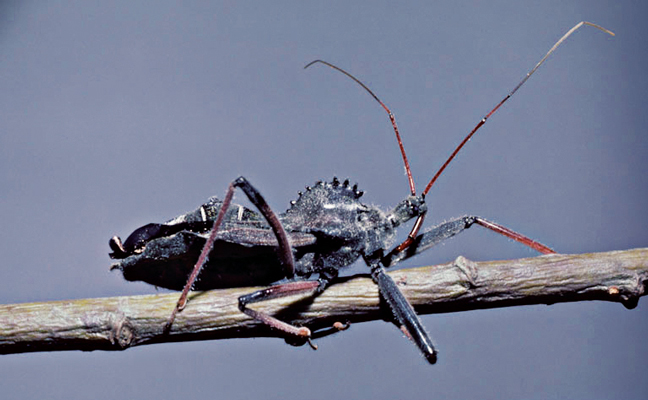 Wheel bugs (Arilus cristatus) are considered to be beneficial insects. But they are still capable of an “immediately and intensely painful” bite if threatened, according to the Texas A&M University (TAMU) Agrilife Extension Service.

Wheel bugs often are mistaken for another assassin bug, the kissing bug, which is comprised of members of the Reduviidae subfamily Triatominae. Also known as conenose bugs, kissing bugs are vectors of Chagas disease.

The wheel bug is not a vector of disease. That’s because wheel bugs are only interested in sucking “bug juice” from the likes of grasshoppers and large caterpillars — completely different from kissing bugs, which are parasitic on humans, dogs and other mammals. Still, a wheel bug specimen can be easily misidentified as a kissing bug, and panic can ensue. That’s where the confident identification by a pest management professional comes in.

At about 1.24 inches long, wheel bugs are the largest of the approximately 150 species of assassin bugs known in North America. The cog-like crest at the top of their thorax gives them their common name. It is an easy way to distinguish them from kissing bugs, of which about 10 species are found in the U.S.

Wheel bugs rarely are invasive, and do not pose the potential public health threat kissing bug can. Kissing bugs, meanwhile, are particularly attracted to the smells, heat and hosts of dog kennels. A website devoted to tracking kissing bug populations, as well as best practices for control and prevention, can be found at KissingBug.TAMU.edu.