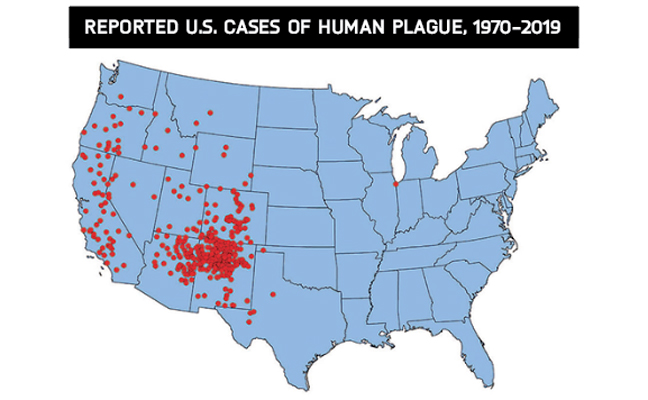 One dot is placed randomly in the most likely county of exposure for each confirmed plague case. Since the mid–20th century, plague in the U.S. typically has occurred in the rural West. The case shown in Illinois was lab-associated. SOURCE: CDC.GOV

This summer, a 10-year-old girl died from complications associated with plague in La Plata County, Colo., and an adult tested positive for plague in South Lake Tahoe, Calif. Both instances are linked to bites from fleas carrying Yersinia pestis, the bacterium that causes plague, officials say, and both investigations are ongoing at press time.

The adult is the first to test positive in the area in five years, but is expected to make a full recovery. They are thought to have been bitten by an infected flea while walking their dog. The Tahoe Daily Tribune reported in early August that “positive tests were found in chipmunks with no human contact” at a local beach and a public park. Both areas were closed temporarily for vector control.

It is not clear from published reports about the Colorado case whether officials are theorizing that the infected flea came from a rodent, a domestic pet or another source. Several articles mention the girl was active in her 4-H club, raising hogs, which could be a possible source.

At press time, neither case confirmed which form of plague was diagnosed — bubonic, septicemic or pneumonic, although the last two forms stem from bubonic plague. According to the Centers for Disease Control and Prevention (CDC), 80 percent of U.S. plague cases have been the bubonic form. On a web page devoted to plague, the agency notes that “plague bacteria circulate at low rates within populations of certain rodents without causing excessive rodent die-off. These infected animals and their fleas serve as long-term reservoirs for the bacteria. This is called the enzootic cycle.” The CDC website says:

“Occasionally, other species become infected, causing an outbreak among animals, called an epizootic. Humans are usually more at risk during, or shortly after, a plague epizootic. Scientific studies have suggested that epizootics in the southwestern United States are more likely during cooler summers that follow wet winters. Epizootics are most likely in areas with multiple types of rodents living in high densities and in diverse habitats.”

The CDC website also offers resources on how to recognize signs of plague, as well as recommendations pest management firms can share with employees and customers to protect themselves and their loved ones. 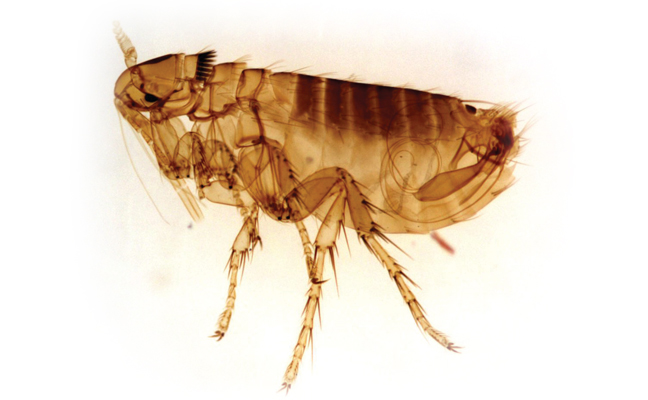 The commonly encountered cat flea (Ctenocephalides felis) is not considered to be a strong carrier of the bacterium that causes plague, Yersinia pestis. Rather, plague is most commonly transmitted to humans in the United States by infected ground squirrel fleas, Oropsylla montana, pictured. This species was formerly known as Diamanus montanus or Ceratophyllus acutus.

Another potential carrier is the tropical rat flea, Xenopsylla cheopis. As its common name implies, rats are the preferred host for this species, although it does occasionally bite humans. It is found primarily in the southern United States and in Southern California, and is a large carrier for plague globally.