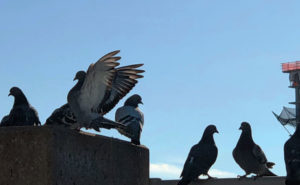 Pigeon problems are prevalent in nearly any type of accounts. PHOTO: BRETT MADDEN

Pigeons are among the most common birds we encounter in our daily lives, yet their biology is surprisingly complex. Their adaptability and digestive capabilities allow them to thrive in a wide range of habitats, making them resilient. Biological facts include:

And here’s one to stump your technicians and customers: Did you know  they are one of the only bird species capable of sipping water, rather than having to bend their head back to enable it to flow down their throat?

Pigeons have been observed to be monogamous and exhibit a high degree of parental care:

Once these fledglings reach four to six weeks of age, they leave their parents’ nests for good. But before these youngsters have left the nest, more eggs are laid. This occurs during all four seasons, meaning that pigeon numbers increase drastically the longer they are left to their own devices.

Still, these young pigeons remain with the flock and continue to utilize lofts, attics and other concealed locations in and around structures as their roosting spots after they have fled the nest.

Because of their rapidly increasing numbers, pigeons rely heavily on humans for their food sources, as well as roosting and nesting sites. These birds only require 1 ounce of water per day, meaning just a small amount of stagnant water or snow is all they need. Pigeons in rural regions feed on seed and grain frequently, posing a major problem for farmers. In urban settings, they scavenge for whatever they can find — from littered food in streets and sidewalks to open dumpsters. The more improperly stored and disposed of food supply you provide, the more pigeons you will have.

While pigeons usually live up to 15 years in captivity, feral pigeons often only have a lifespan of 3 to 4 years. They often die of one of the various diseases they are known to carry, or else because of a predator.

Their nesting material, made up of twigs, leaves, and straw, is often reused for the whole year. It hardens after a few uses from their droppings, and is a serious health risk: Not only is the nest where their diseases can spread, it is also a perfect environment for bird mites. Left there long enough, the bird mites spread to whatever other suitable habitat they can find — and often, entire buildings.

Why do pigeons rely so much on humans to survive? There are two main reasons:

R. Brett Madden, Esq. is president and founder of Tinton Falls, N.J.-based AviAway Bird Control Services, which provides bird control services and consulting throughout the United States and Internationally. He may be reached at brett@aviaway.com. Check out AviAway's video library on YouTube of bird control projects for examples and various bird control methods.

Check your knowledge of birds