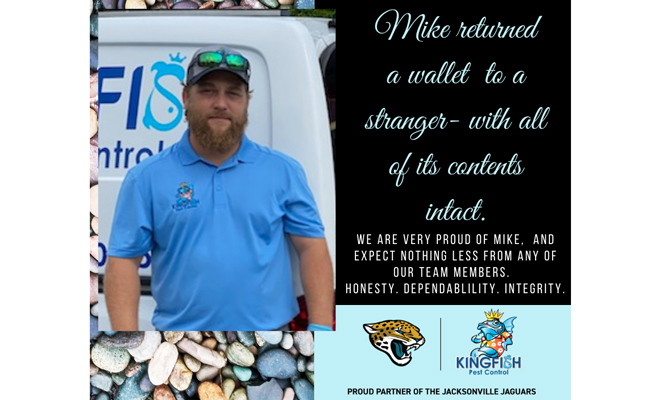 Kingfish Pest Control shared a post on Facebook expressing its pride for the employee who returned the wallet. PHOTO: KINGFISH PEST CONTROL

In an email to the firm, Ian McCarthy said he had never heard of Kingfish before this act of kindness.

His dad had lost his wallet while driving when an employee of Kingfish Pest Control found it. Michael Parrish, the employee, took the time to research and call to find the owner of the wallet.

McCarthy and his dad were able to pick up the wallet and all the contents were all still there.

“In times like we are in now, this is prime example of honesty and integrity,” McCarthy said in the email to Kingfish. “Wanted to thank your company but would love for you guys to pass along a huge thank you to Michael for restoring my hope in humans.”

Owned by Kristin Lunsford and her husband, Brian, a second-generation pest management professional, Kingfish’s mission is “to provide high-quality pest control services at competitive prices using the newest technology and training to create exceptional value for our customers. Our vision is to be a superior service company that everyone trusts. By maintaining a high level of service, we will have the opportunity for growth and therefore, the ability to enrich the lives of our team members and give back to the communities in which we serve.”