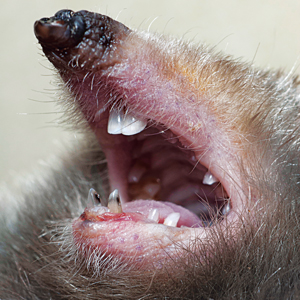 Eastern moles may bite when handled, so beware. Photo: courtesy of, and copyrighted by, Gene White, pmimages@earthlink.net

Scalopus aquaticus, or Eastern moles, are a common pest.

Moles are not rodents; they belong to the mammalian order Eulipotyphla, like shrews and hedgehogs. Eastern moles have pointed snouts; greatly enlarged, rounded front feet with stout claws; and a short, nearly naked tail. They are 5 to 8 inches long, with short, velvety fur that is usually gray or silver. The eyes and ears of moles are very small, concealed beneath the fur.

Moles are active on and off throughout the 24-hour cycle. They commonly are noticed tunneling or pushing up mounds during the spring and fall, on damp days or following rain showers. When the ground surface becomes frozen in the winter or very dry during the summer, moles retreat to their deeper burrows.

The number of mounds or surface ridges seen in a yard should not be used to estimate the size of the mole infestation. Generally, one acre of land supports one to three moles at one time. One mature mole constructing deep tunnels can produce a dozen or so mounds over the course of a week, giving the appearance that the area is “heavily infested.”

Moles use tunnels, or main runways, as major lanes of travel. There are two main types: